I love a documentary on a grisly subject, and SBS recently came good with the motherload.
The Lobotomist is a one-hour profile of Walter Freeman, the American doctor who invented the infamous and incomparably nasty medical procedure known as "transorbital lobotomy". Performed on hundreds of thousands of mentally ill patients between the 1930s and 1950s, it left countless numbers of people shadows of their former selves, with reduced brain capacity and often severe disabilities.

Now The Wah has great difficulty in watching anything to do with ice-picks rattling around the pre-frontal cortex, and indeed forsook The Lobotomist for shootin' up zombies or whatever he was railing against in "Left 4 Dead".

Yes, you can appreciate the irony.

But I'm starting to think that perhaps The Wah's frankly obessive paranoia about the impending zombie-pocalypse owes some credit to the horror of lobotomy. Perhaps there are academic papers linking the two already; but a quick internet search links zombies primarily to voodoo magic.

Vampires suck your blood and leave you soulless, a werewolf's bite turns you into a hairy, flesh-eating canine - both arguably leave you without full control of your faculties. But the simple notion of the shuffling undead remains by far the more feared of all the literary/cinematic monsters. You don't see anyone going on "vampire" or "werewolf" walks through major CBDs the world over. 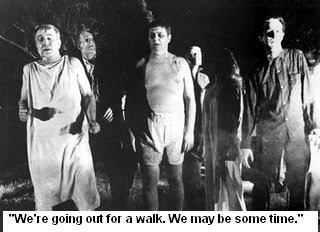 I'm intrigued by all of this in the context of a BBC story about a lack of healthy brains being donated to universities for vital research into Alzheimer's and autism. While many of us have resolved to donate other organs like livers, kidneys and hearts to help the sick, I wonder how many people have thought about what might happen to our grey matter once the synaptic connections stop firing for good?
Posted by Girl Clumsy at 6:44 AM