Tonight, there were high kicks, cartwheels, and more blood than the Red Cross sucks out of donors in a week. Most of it got on me: 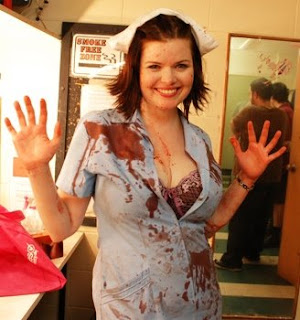 At the start of each show, three characters (including my nurse, Lottie Buble) ask for an "offer" from the audience to incorporate into the show. Tonight, mine was "ninjitsu". This resulted in Nurse Lottie being a secret masked vigilante known as "The Leggy Avenger". There was much high-kicking, judo-chopping, and cartwheeling. I got to kick muchos arse, and in return had gratuitous amounts of our cocoa & glucose mix sprayed over me.

The best thing about this show has been the focus it's forced me to have. There's no chance to pop to the green room for a drink, or gasbag with fellow cast members. We all stand backstage, ready at a moment's notice to step on if needed or called, sometimes snatching a second to talk about a potential plot device, or scene that could or should happen. That complete dedication to the task at hand is fantastic; my brain feels sharper from doing this. 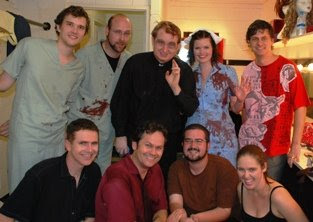 I must make special mention of our one-of-a-kind musician Kris; who I forgot to thank in yesterday's post (I believe the internet-appropriate term is "facepalm").  Kris is by far the most talented improv musician I've ever met, and it's a great thrill for Impro Mafia to have him onboard for this show. Kris also has a great blog called Musical Hotspot, where he shares his experiences and expertise as an improv musician.
Posted by Girl Clumsy at 11:49 AM