In the Country with Kev

Yesterday I spent the best part of two hours driving north to Federal, a small community just outside of Gympie. With the sun shining, the talkback cranked up in the station car, and The Wah's polaroid sunglasses adding a particularly warming sheen to the countryside, it was a very pleasant journey to a lovely part of the world. 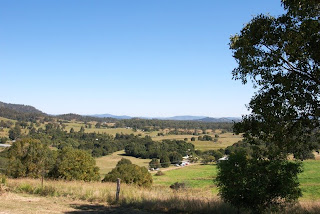 Enjoy the view. Eventually, a lot of this is going to be the Traveston Crossing Dam.
The sharp-eyed among you might spot some news vans in the gully below. Yes, I was there for a media conference, with the Right Honourable Kevin Rudd, MP & PM, himself. Queensland government flunkies in 4WDs ferried us up to the top of the hill, but K.Rudd & Co decided to stretch their legs. 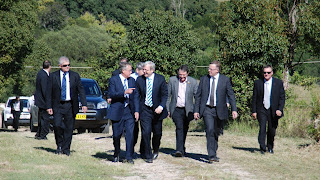 Here's a challenge - spot the PM's minders.
They were there to announce a $613 million upgrade to a 12km stretch of the Bruce Highway, one of the most notorious blackspots in the state. There was a plan of the project up on a blue board, and we all did our usual trick of swarming the PM as Main Roads officials explained the route to him. 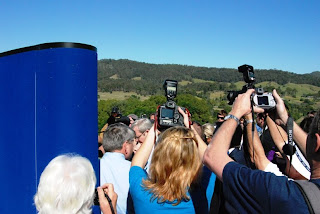 Where's Kevin?
Turns out the reason we were on the hill in the first place was because the upgrade will actually be cut into it. So we were standing about 30 metres above where the road will eventually go (completion scheduled by 2012).

Best part about the day was getting another Brisbane Times byline out of it. It's a good reason to keep taking my Nikon D80 out on jobs in case photographs are a possibility. Mind you, I really must do some sort of course to actually work out how to use my complicated new lens.
Posted by Girl Clumsy at 7:36 PM