A Lesson in Chants

The rain tumbled onto my hair and shoulders as I hurried into the Annexe for another week of state parliament, encouraged by the fragant scent of ozone giving an extra hint of promise to the morning air.

Sadly, parliament itself turned out to be rather dull. A rather procedural series of ministerial statements, followed by an uninspiring Question Time, punctuated only by Deputy Premier Paul Lucas calling Opposition Leader John-Paul Langbroek a "goose".

So it was with great eagerness that I welcomed the lunchtime arrival of around 4000 striking state school teachers. 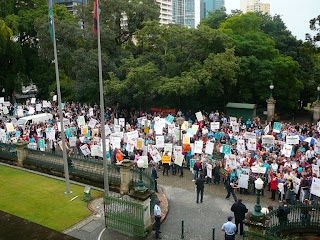 See if you can spot my erstwhile colleague, Disco Stu. Hint: he does not have a placard.
I dashed out onto the balcony outside the Red Chamber to catch my favourite part of any protest: the chants.

Now teachers - with their skills in language and numbers - seem to love getting inventive with their chants. I'd heard some great ones during the Labor Day march a few weeks' back, and some of those got trotted out again ("2,4,6,8, Anna just negotiate! 3,5,7, 9 - Pay the teachers more, it's time!").

They'd gone further this time, lining up some arrows at Education Minister Geoff Wilson. Unfortunately, their group diction was not as strong as it might be, so when they yelled "Lying Wilson!" it came across like "Brian Wilson". They sounded like they were all raging against the former lead singer of the Beach Boys. 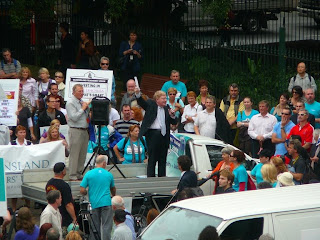 "California surfer rock.... really really ticks us off!"
Incidentally, I cracked this joke back inside the Chamber, and later heard an ABC journo using it on the phone. Not I'm not saying there can't be covergent joke-telling. (In fact, I myself cracked wise about another slogan "Fair Go Anna", which I claimed was a tribute to an even-handed lace monitor. This photo snapped by the Brisbane Times shows I wasn't the lonesome ranger on that one). But darn it, I've got to start being more confident in getting the zinging one-liners out there.

I also enjoyed my confusion about the chant "Not happy, Anna!", which when said quickly by several thousand people, sounded more like they were refusing the offer of a musical instrument. "Not a piano! Not a piano!". It's all in the delivery.

It's hard not to be noticed up there on the balcony outside parliament, and unbeknownst to me, a teacher friend of mine - who also happens to be a talented photographer - had aimed her zoom lens on me: 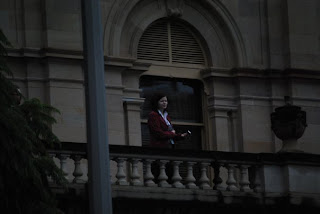 I should stand on large stone balconies more often.
Perhaps wearing a jewel-encrusted corseted gown.
Maybe invest in a crown. Oh, f*** it, why can't I just be Elizabeth I?
The rally ended after the QTU delegation met with the Minister, failed to get him to throw in a few extra dollars, and wandered back out to issue a new chant, the most ominous so far:

"Queensland teachers are not slack, Anna we promise we'll be back!"

Well, except for the music teachers, I thought.