I am delighted to present to you a piece of sub-editorial silliness that I'd like to think would make Stuart Littlemore chuckle.

During a pre-bedtime news check, I logged onto news.com.au to find this on the front page: 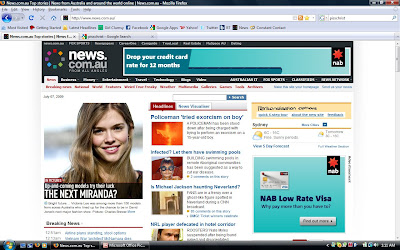 Now look closer at the top story next to the wannabe model: 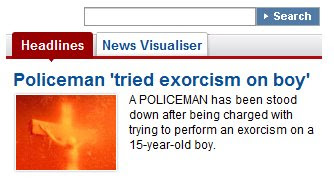 Notice something familiar about that photo?

It is, in fact, Andre Serrano's Piss Christ, a controversial artwork first displayed in America in 1989. In 1997, it came to Australia, where two teenagers smashed it with a hammer as it hung in the National Gallery of Victoria.

It's called Piss Christ because it is a photograph of a small crucific suspended in a jar of the artist's own urine.

I love the thought that a late-night sub-editor saw a story about an alleged exorcism, did a quick Google search to find a religious-related photograph, was attracted by the bright yet filmy orange of the Piss Christ, and whacked it up without a second thought.

Although, it could be that the sub-editor is making a meta-point about the terrible things that have been done to religion, or in the name of religion. Perhaps he or she is having the last laugh. In that case, I salute you, subversive sub-editor.

I wanted to put these screen shots up because I suspect by Tuesday morning it will be long gone.

But I'll let you make your own jokes about the front page of News Limited's flagship website being covered in urine.
Posted by Girl Clumsy at 1:49 AM