Our time in Vietnam is drawing to a close; after a full day here in Ho Chi Minh City on Thursday, we're off to Cambodia on Friday.
Thanks to everyone who's been reading and commenting. We're having a grand adventure, and as always it's lovely to be able to write about it as we go along.
Now for more photographs! We've been using both my new Nikon D80 with the mega-lens that I still don't really know how to use, and the Panasonic Lumix point-and-shoot. The following are a mixture of both: 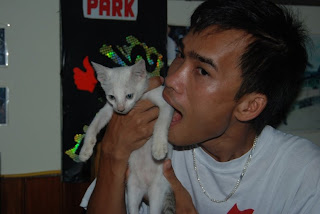 Our fantastic guide Quan, doing his bit to break
down those degrading cultural stereotypes. 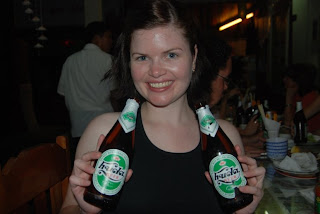 Just keeping abreast of the local beers in Hue. 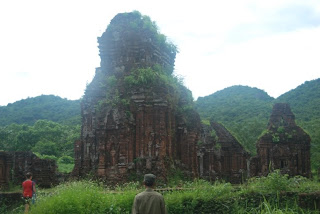 One of the ruins at My Son, outside Hoi An.
These Hindu temples were built by the Champa people
between the 4th & 14th centuries, then lost to the jungle
until the late 1800s. Many were destroyed by US bombings. 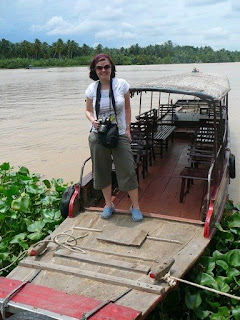 On a boat on the Mekong River, near the town
of Ben Tre. The water is that colour due to silt. 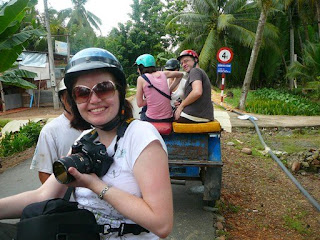 We rode bikes pulling trailers to our lunch at a local village.
I can't describe how much fun this was. 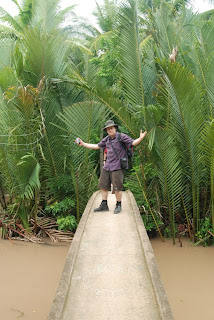 The Wah on a bridge, as we await our sampan boats
Do you like his ridiculous hat? 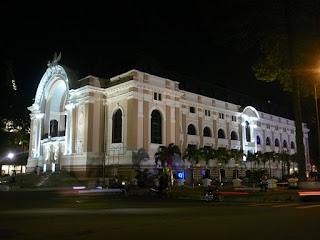