1994 was a good year. I was cast in my school's musical in a highly-sought-after "speaking" role; Madonna released her Bedtime Stories album; Frontline began on Australian television; and I was eventually named Dux of Year Nine (oh yes, my friends, top marks for everything, even maths).

But nothing takes me back to '94 than a particular TV show. A TV show that would not only cement my love of all things "journalism", but fuel the fire of what would become a fairly geeky fangirl-ish nature. 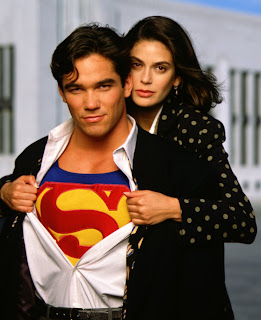 Forget your Smallville rubbish. The entire Superman crew, all growing up together? In Kansas? With Lex Luthor already pre-balded? Don't give me that rot.

No, Lois & Clark was the original re-invention of the Superman tale for chicks - a screwball romantic comedy set in the Metropolis offices of The Daily Planet. Look, look - click here to see the marvellously naff Season One title sequence! Oh, the green screen! Oh, the high-waisted pantsuits!

In Lois & Clark, it was the relationship between ace reporters Lois Lane and Clark Kent that mattered most - even though Dean Cain looked mighty fine when he donned the spandex and Supe'd up. Lois and Clark would throw barbs at each other like they'd just swallowed a book of Dorothy Parker quotes; Lois' impulsive and tempestous nature was an engaging contrast to Clark's polite and dependable manner. Together they fought villains, mad scientists, cryogenically-unfrozen 1930s gangsters and even an evil time-traveller that HG Wells dug up.

Teri Hatcher was a dream Lois Lane - all creamy skin and full lips; a far cry from the half-shrivelled spray-tanned beanstalk she appears to have morphed into in order to meet the stringent weight requirements on Desperate Housewives. Her Lois was human. She had a tendency to get frazzled or scared of failure; she suffered an unrequited love for Superman; but at the end of the day had razor-sharp instincts and wit; and wasn't above throwing herself in the path of danger to get the story. My 13-year-old self loved her.

Dean Cain was man candy as Clark/Cal-El - and he was a half-decent actor for the role. He did make my little heart melt every time he looked at Lois yearningly while she completely ignored him (he was almost pre-Colin-Firth-Darcy, in a way).  Lane Smith was a gem as editor Perry White; but the real megastar was John Shea as Lex Luthor. Shea was young, full of hair (hear that, Smallville, you chumps?), and loved an evil plot. He also loved Lois as it turns out, and Season 1 was built around this love quadrangle of Lois, Clark, Lex and The Big S himself.

Season 2 started out badly when the original Jimmy Olsen was replaced by Justin Whalen - the actor who went on to star in the Dungeons & Dragons movie that sucked so much, it created its own black hole of suckness, into which Justin Whalen was sucked so he could never suck up a movie that bad again.

Anyway, they also ditched Tracy Scoggins, who had played the man-eating gossip columnist Cat Grant. I always thought "Scoggins" should be a name for something, like a home-brewed ale or a mild genital itch. "I've got a case of the Scoggins!" would work well as a jingle for either.

Things got more and more ridiculous during Seasons 2 and 3 - there was a fairly dodgy episode where all of Supe's powers transferred into Lois and she became the saddest-ever-named superhero - "Ultra Woman". Sounds like a feminine hygiene product. But not even the odd appearance of Bruce Campbell could stop the silliness - culminating in a bizarre wedding/clone/frog storyline THAT I DO NOT CARE TO TALK ABOUT.

At some point before the end of Season 4 I believe I lost interest in the show - of course by then it was a few years' later and I had self-important high school wankery to be getting on with. It was treated fairly badly by US network ABC - they killed it off prematurely and buried the last few eps of the show. This was the Age Before Downloads (ABD), so I don't believe I ever got to see the final-ever bit of Lois & Clark.

In hindsight, I can't remember how many school chums also watched this show. I remember having heated discussions about the merits of L&C over the obviously inferior SeaQuest DSV, which used to screen at the same time (7:30pm Tuesdays!) on a different channel. Girls seemed to love Jonathan Brandis in some sort of futuristic yellow undersea wetsuit. "Ew, what a dork!" I'd respond. "He's such a boy; Dean Cain is a man!" Of course, Jonathan Brandis went on to hang himself in an LA motel room so perhaps I shouldn't have been so unkind.

Lois & Clark: The New Adventures of Superman was awfully silly. But it was awfully good fun, and I'm glad it existed to inspire and delight my daggy teenage self.
Posted by Girl Clumsy at 2:04 AM