The Wah has a habit of buying me incredibly clever birthday presents - ones that I would never think to buy myself, but really love when I open them.

This year, it was a Mushroom Growing Kit.

It's a simple, one-box system - you empty a bag of soil and spores onto a layer of mulch/compost, keep it moist and in a dark place, and voila - your own home-grown mushies.

Just over three weeks ago, we set up the kit, and placed it under the sink. For two weeks, nothing much happened, except for the appearance of tiny white spots, the size of a pinhead.

Then about a week ago, we got some mushie action: 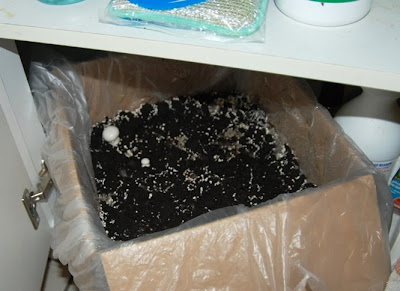 You can see that a decent sized baby mushroom popped out of the soil, with an even tinier brother next to it.

We kept up our watering, and the mushie seemed to get a little bigger every day. But in the last day or so, it's experienced a massive growth spurt, resulting in this today: 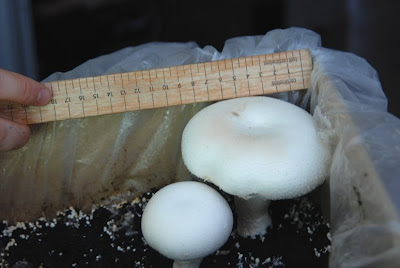 That's right - I am growing the Emperor Funghi under my sink.

The baby brother mushie has also increased in size, but we don't have any others poking their heads up yet. Hopefully they'll make an appearance in the next week or so.

I'm not quite sure when to harvest the Emperor Funghi. Part of me wants to get that bad boy out right now, cover him in some herbs and pan fry with some haloumi. But the other part of me is much more interested in seeing exactly how big he'll grow...
Posted by Girl Clumsy at 1:54 PM