There's been some godawful depictions of women on television. Luckily there's been some awesome characters that help make up for it. This list is restricted to series I've seen; I've also ruled out BBC adaptations of classic novels - otherwise it would be nothing but Elizabeth Bennett from Pride & Prejudice or Margaret Hale from North & South.

I haven't even finished watching the first season of True Blood, but Tara has already impressed me enough to bump Buffy the Vampire Slayer off this list and grab the number five slot (including characters from two vampire-based series would be an indulgence). Played with bravura by Rutina Wesley, Tara is a loud-mouthed know-it-all whose brash persona hides a deeply sad individual. Neglected by her alcoholic mother, and carrying a torch for the undeserving Jason Stackhouse, Tara bluffs and argues her way through jobs and life, spurning drugs and potential relationships in favour of education and knowledge as her survival tool.

I'm just at the stage where Tara is about to undergo an exorcism to expel her own "demon". I like the fact that despite her certain knowledge that she's being scammed, she's unhappy enough to give it a try. It's a flaw of many females that we will give something ridiculous a considered trial, if we want so desperately to believe it will help us. How else do you explain the cosmetics industry? 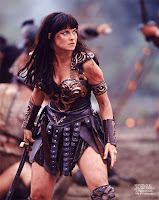 It's the shameless pick for superhero character of choice. Xena: Warrior Princess is often ridiculed for its Sapphic overtones and high camp episodes - but regular viewers know the series had bold, often epic story arcs, played out by a ballsy yet charming cast. At its centre is Lucy Lawless, undeniably brilliant as the repentant warlord on a quest to undo the wrongs of her past. Not needing Hercules' immortal parentage, or Buffy's "supernatural" powers, Xena is all-woman killing machine, highly-trained, intense, focused, deadly and above all, wise. She struggles with being "good", and the glint of joy in Lawless' eyes during fight scenes shows how much she loves to be bad. Xena's reliance on a tight group of close friends demonstrates the importance social interaction plays in helping people make good choices.

It's hard to follow in the footsteps of John Simm, who gave such a marvellous performance as bewildered time-travelling policeman Sam Tyler in Life on Mars. Many were not impressed by the idea of Ashes to Ashes, particularly because while Philip Glenister would return as Gene Hunt (possibly the greatest character ever, period), Simm was too busy going off to play a different type of time-traveller. But they didn't give enough credit to the show's writers, and to the commitment and sparkle of Keeley Hawes as Detective Inspector Alex Drake. A police psychologist who wakes up in 1981 after being shot in the head, Drake holds her own as a woman in a police force still awakening to the idea of females in power. She's intelligent, competent and confident - and a dab hand at running in stiletto boots.

She's also batshit crazy, because she left her 12-year-old daughter Molly back in the future. Whereas Sam Tyler eventually lost his reason to "get back", Drake never does: a single mother, she has to find her way home. It colours everything she does, even as she settles into life in Thatcherite London. Her relationship with "The Gene Genie" is bursting with sexual tension, yet retains a charming innocence. She calls him "Guv" and tells him he's just a construct of her mind; he offers her grudging respect then calls her "Bols" and stamps her backside. She's the partner he didn't imagine having; but now can't do without. 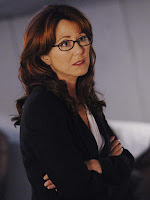 If I didn't already have The World's Best Mum, I'd be hanging around Mary McDonnell's house, hoping she might adopt me. Uexpectedly appointed President of the Twelve Colonies after a Cylon nuclear attack almost obliterates the human race, Roslin turns out to be the Winston Churchill of the Fleet - the right leader at the right time, big-thinking and inspirational, yet prone to dark moods and fits of pique. It's easy to draw the parallel of the softly-spoken, often dreamy Roslin as the "mother" figure to the fleeing colonists, and the crater-faced Admiral Bill Adama as the "father". But make no mistake, Roslin's soul is iron, and it's her, not Adama, who takes a harder line against the Cylon enemy.

Weakened by a long-running battle with breast cancer, Roslin is nevertheless sustained by her duty to protect the colony and her growing affection for Adama. There should be a digital channel dedicated to their fireside-and-ambrosia chats - they're the most low-key parts of the series, but the most compelling. 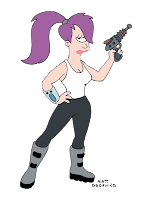 It takes the skill of animation to create the ultimate three-dimensional woman. Fry may be the heart of Futurama, and Bender Bending Rodriguez its boozy guts, but Leela is its head - mostly screwed on tight, but with the occasional bout of uncertainty. Growing up with one-eye in an orphanarium made her tough; but inside she's still gooey - she cries when she thinks her pet Nibbler has died, and longs to be "normal" enough to have restorative surgery to gain a second eye (blessedly, that episode ends with Leela realising she's fine as she is - a lesson more of us chicks could stand to learn).

She's got a chequered sexual history - not afraid of a one-night stand (hello, Zapp Brannigan), she still yearns for a great love, but overlooks adoration close to home. She's not distracted by her difficult upbringing, but is not averse to finding answers - and I defy anyone not to bawl when she discovers that she's not in fact an alien, but the daughter of two mutants who thought their one-eyed child was too special for a life hidden in the sewers.

Leela high-kicks, captains the spaceship, and saves the Planet Express crew's collective ass more times than you can count. She's resourceful, clever and strict, but also kind and fair. She's confident in her body and not obsessed with it. In a show that regularly and tongue-in-cheekedly takes the mickey out of women ("They're governed by their emotions!"), Leela nevertheless emerges triumphant - the uber Amazonian wonderbabe from the future.
Posted by Girl Clumsy at 10:33 PM