I'm sure getting excited about infrastructure isn't very cool or trendy, but gosh darn it - today was a fun day to be at work. The day was fine, the skies blue, and the fresh bitumen strong on the nostril and sticky underfoot: 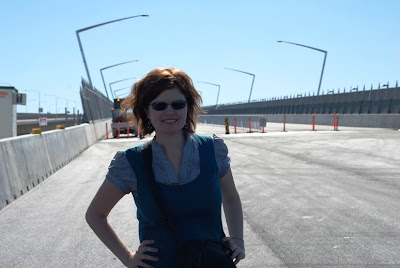 This is the new Gateway Bridge - the second span across the Brisbane River from Eagle Farm in the north to Murrarie in the south. The first opened in 1986, and is now at capacity. This new one gradually opens to traffic next week, and will take all traffic for six months to allow the first bridge a much-needed refurbish. Both bridges will be open from December. 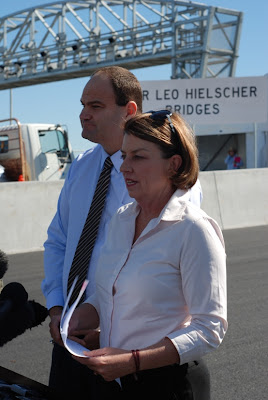 Today Premier Anna Bligh and Main Roads Minister Craig Wallace turned up to welcome Google to the bridge - the Streetview car became the "first" to cross it, in order to map it with its 360-degree camera rig. The Google dude seemed a bit overwhelmed by the attention: 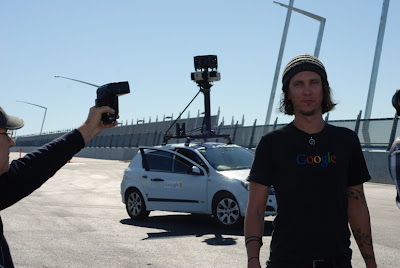 He didn't say much either; too worried about being sued, apparently.

After all the shenanigans, I was able to take my new little Yaris up for an actual drive on the bridge. A bunch of news cars had headed up to take shots, so I just followed. It's been fun recording "firsts" in the Yaris - first petrol fill, first drive in the rain - but this was a particularly impressive first! First drive on the new Gateway - possibly first ever Yaris to do so! 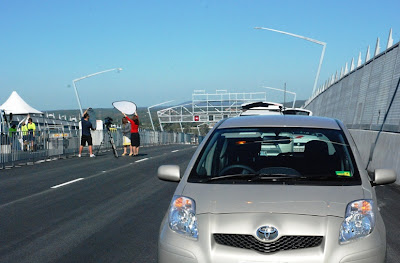 Yes, I admit. Little things do get me excited sometimes.
Posted by Girl Clumsy at 7:00 PM