A Week of Impro

We had the second heat of our interschool impro comp at the Brisbane Arts Theatre this evening. It's always fun watching baby improvisers - some just 14 or 15 years old. There were lots of amusing moments; some intentional, some not. One of my highlights was a party scene where a player was told to be "Tony Abbott". She replied that she didn't know who he was. So instead she was given the much more teen-friendly Justin Bieber, while her fellow player took on the role of Leader of the Opposition. A third player - who wasn't privvy to the dishing out of characters - then had to try to guess who each of her party guests were. The girl playing Tony Abbott hitched up her shorts and talked about going swimming in Speedos. The party host looked confused, then responded:

And I nearly fell out of my chair. I think the internet term is "HA HA LOL ROFLCOPTER".

Anyway, it's just the start of a week of impro shenanigans, as I'm heading down to Canberra on a Wednesday red-eye to take part in the 2010 Improvention. I'll be there for a couple of days for seminars, workshops and meetings about impro - as well as performing in the Thursday night show. I urge any Canberrans bored with that whole election guff to come along to the Street Theatre for some good laughs and perhaps even a friendly drinkie afterwards.

But then! Oh, then! I'll be back, so back, back as hard as anyone can be back, for the one-off impro special of the year - Prognosis: Death! Yule Die Laughing. 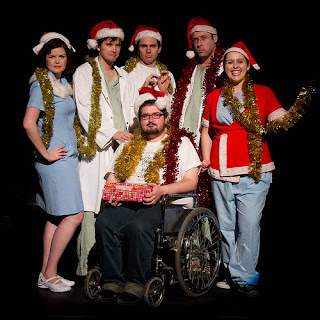 This is the Christmas in July special, and it's going to be more fun than a barrel of ebola monkeys. It's on this Saturday 24 July, and tickets are just $15 adults and $10 concession. You can grab tickets at the door, or book online. The show starts at 8pm.

Long-time readers will know just how much this show means to me, how much joy I get playing these characters with my friends. This episode is designed as a one-off, so you don't need to have seen any previous episodes to enjoy Prognosis: Death! Yule Die Laughing.