Sunday. I was feeling a little bad about not doing any hands-on volunteering for the flood clean-up, so I decided to bake cupcakes. It was a fun process; interrupted only by the surprise shattering of a glass tumbler that The Wah had been retrieving from an overhead cupboard.

Once cooled and iced, I asked a buddy on Twitter who'd been out and about where I could deliver some of these (reasonably) delicious treats without getting in the way. 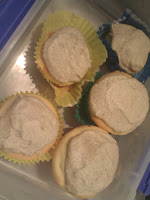 He tipped me off that the lovely Janet Leach, purveyor of exquisite designer goods through Artery Store, had seen her lovely old Queenslander inundated. While a mass clean-up effort had rid the street of most of the mud and muck the river had deposited, she remained without power.

I packed up about ten cupcakes, along with some oranges, bananas and a bottle of wine, and headed down to West End.  Janet said she was delighted to receive my little care package, and I was very pleased.

Monday. I got home from work and The Wah said "Your attempt to kill me failed, by the way."

"I was beginning to eat one of your cupcakes and I found a large piece of glass in it."

It turns out we hadn't quite cleaned up all of the broken glass.

"But... but I gave Janet those cupcakes. And she was going to save them for.... her children!"

I could see the headlines.

IS THIS WOMAN WORSE THAN HITLER? YES, SAYS EVERYONE

Aghast, I desperately messaged Janet, telling her oh my god Greg found glass in one of the cupcakes because a glass broke when I was baking and I thought it had all gone on the floor and oh my god please  check them or better yet throw them away just throw them I'll make you some more oh please god don't let me have killed your children.

Janet got back to me, saying the kids had in fact eaten a cupcake each for afternoon tea - OH DEAR GOD - but were fine. She also said she'd throw the rest away, just in case.

The Wah now refers to them as my Murder Cakes.