It's my great pleasure to announce that The Tasmanian Babes Fiasco has won Best Play in the 2010 Briztix Audience Awards!

So I have to begin with an almighty thank-you to everyone who voted. I'm so proud of the Brisbane Arts Theatre, the cast and crew of the show - and of course, eternally grateful to John Birmingham and playwright Simon Bedak for allowing and helping me stage one of my most favourite books.

Perhaps most surprisingly in all this was that I tied for the Best Director gong (with a Queensland Theatre Company director - !)

For me, this is quite ironic - as I feel I made more mistakes during Tassie Babes than any other production I've worked on. There were certainly a lot of challenges during the rehearsal period: some I think I rose to reasonably well; others made me want to curl up in a ball and tear my nails out.

Hindsight is a wonderful thing, and I do like to think I've learned from those errors, blunders and missteps. Certainly it did teach me a few things about communicating with people; and hopefully the sense to know when to just back myself and trust I know the material well enough to make the right decisions.

Above all, I try to remember first and foremost the achievement of the show - from newly scripted in January 2010, we went on in April 2010. Just under four months of editing, cutting, rehearsing and staging. And it was a pretty darn good show, if I do say so myself.

While we're on the subject of theatre, I'd like to recommend to you the BAT's newest production - Cosi. 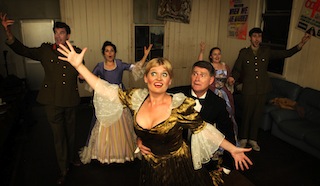 This is Louis Nowra's modern classic, about a group of patients from an institution attempting to stage Mozart's Cosi Fan Tutte. Director Susan and her cast have done a superb job. It actually stars three Felafel and Tassie Babes cast members - so there you go, an iron-clad guarantee of quality!

It plays until April 16, and if you are in Brisbane, please consider heading along and seeing it. It's touching, heart-warming and so funny you will wind up with sore abs from laughing so much.

You can book tickets here!
Posted by Girl Clumsy at 9:59 AM