As a member of the Queensland Parliamentary Media Gallery (with the Speaker's Handbook-shaped scars from the notorious hazing process to prove it), I am a reasonably regular attendee at what we colloquially refer to as "hard hat jobs".

This is where We Esteemed Journalists get kitted up in safety vests, goggles, steel-cap boots and yes, the obligatory hard hats, and follow Our Illustrious Leaders onto an infrastructure project, there to Gape in Wonder at the Awesome Power of Technology and Construction and Stuff.

They can be a bit of a pain - often because they take a long time, but mostly because of the safety gear rigamarole. No matter how early I arrive, there are never any supplied boots that fit me, so I wind up clomping around like a wounded hippo. In a bright orange vest. It's just impossible for me to not look like a bumbling fool dressed like this. 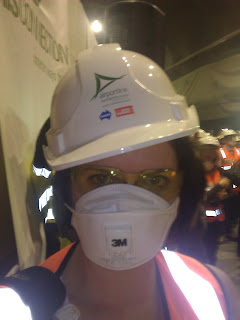 But sometimes the small part of me that remains unbattered by cynicism escapes.

Today I got to see the second of two tunnel boring machines drilling the Airport Link tunnel breakthrough its finish line at the Lutwyche work site. Sandy, as the machine is known, will now be buried alongside her twin Rocksy, their job completed.

Now, putting aside opinions of the project itself, I have to admit going 40 metres underground to watch what basically amounts to a giant horizontal robot getting all Hulk Smash on some rock - is really kinda cool.


However, this brings me to an.... awkward confession.

You see, jobs like these can get very crowded, particularly when you're dealing with a small space. Lots of journalists juggling microphones, trying to get close to the speakers - in this case, Premier Anna Bligh and Treasurer Andrew Fraser. Microphones that are generally held at... chest height. An area that poses no hazards until, well, you have a female interviewee.

I mean, you've got to get your recorder reasonably close to the subject's mouth, without incurring the wrath of TV cameramen by obstructing it completely. You can keep as steady grip as you like, but if your subject moves suddenly...

...What I'm saying, dear readers, is that I've accidentally brushed against the Premier's chest so many times, I'm surprised she hasn't lodged a police complaint against me.

In my defence, Your Honour, it's backhand brushing. It's not strictly groping...

I'm just digging myself further and further into a hole, aren't I?

Sandy? Rocksy? CAN I GET BURIED WITH YOU PLEASE?
Posted by Girl Clumsy at 10:58 PM