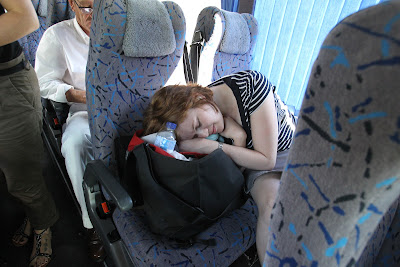 You know, I could say that the person who suggested this photo be taken will pay... but then she's behind in the opinion polls and there may be little point in adding insult to injury.

So far, we've visited Rockhampton, Yeppoon, Clairview, Mackay and Bowen. Anna Bligh's announcements have been education-related, which she considers a strong suit. Tonight we fetched up in Townsville - just in time to catch up with the other mob following Campbell Newman about. Will their campaigns cross paths later today? My guess is no, due to the army of tacticians and event planners on both sides, but I'm happy to be wrong. We all remember that gentlemanly encounter between John Howard and Mark Latham during the 2004 federal election.

The big scandal so far is the revelation an ALP candidate made racist and homophobic remarks in an online forum. 19-year-old Peter Watson has now been expelled from the party, so won't run for Southern Downs, a safe conservative seat he was never going to win anyway.

Apparently Labor will have a look at its screening procedures; my suggestion would be including the question "Have you ever left a comment on a YouTube video?", and if they tick the "Yes" box, tear up their application. But then I've always thought the video-sharing service had the angriest, rantiest, whitey-est of all young male trolls. Apparently there are others.

The whole thing's made me think about the issue of young people in politics.

During the last week of state parliament (conveniently held last week), I had a chat with a retiring MP about recruiting the politicians of the future. He said it was getting harder and harder; mostly because your private life gets put through the ringer far more than in years gone by.

Anna Bligh said on Tuesday that it's normal practice for parties to run young candidates to give them some "political experience". A taste of La Dolce Voter, if you like.

The man who holds the safe conservative seat of Southern Downs is Lawrence Springborg. He was first elected at the age of 21, and is considered by most on both sides of politics as a respected hard-working MP.  So age is possibly less of an issue to the electorate than relative levels of d**kheadedness. (Look, Mum, I made up a new word!).

Are young people simply in a better position to run because they have less history to worry about, and therefore potentially fewer incidents of demonstrable d**kheadedness?

Or is their eagerness to embrace the campaigning life, often before they've even left their teens, actually evidence of their d**kheadedness? Shouldn't they be out getting life experience first? But when was taking part in politics not a life experience in the same way as working as an accountant or a teacher or police officer or pool cleaner for wealthy widows?

Are the parties recruiting young people because those with the life experience take one look at politics and think "No way"?

Just some thoughts I've been pondering. Would love to hear yours!
Posted by Girl Clumsy at 1:35 AM