"I still have my WRNS scarf, with all my history on it, I can give it you if you like," she said.

That was last night; today she dug it out. A rough, yellowing fabric, linen I think, although my knowledge of habidashery is sadly minimal. 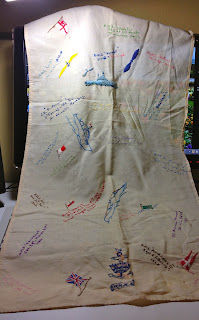 I've been interviewing her, on and off, for days. "We haven't even LOOKED at my memoirs file on the computer," she mock-complained to friends this evening. "She's just had me TALKING."

I've had her talking because I want to capture her stories as they come to her mind, to record her manner of speech, her delivery, her words. Editing what she's already written, fleshing it out with my own transcribed interviews - that can come later.

"If it comes," she said, rolling her eyes.

Well, I am lazy. And I have spent much of my time here sleeping and recovering from illness, letting my poor, rundown body do very little for a while. But interviews just take an eager ear and a few questions. That can be easily done on the verandah, overlooking the sparkling harbour, with the breeze gently dancing with the flowers in her garden.

It was on the verandah today where she'd brought out the scarf, as well as the crossword from the Telegraph, which she has delivered weekly. Got to keep up on the news from Blighty, even though it's a desperate place to live these days, according to the Telegraph.

The memories are wonderful, but the detail can be hard to get right. So many years, so many adventures.

Then in comes the scarf.

She got issued with it when she joined the Women's Royal Naval Service in 1943. Every base she served in is listed, along with a picture of the type of craft it serviced, and even a flag of the country the base was in. Mostly handily for the amateur family historian - it lists full dates of service in each and every place, right up until her demobbing. It's a historical document in tapestry. 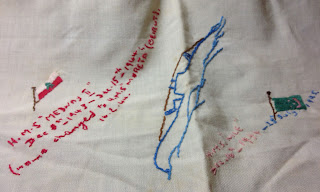 The embroidery is crude, or at least that's what she thinks. But she was 17 years old when she began it. I had no sewing skills at all at 17. I still don't. Perhaps one day this blog could stand as a sort of historical document of parts of my life. But you can't feel the stitches, can't run your fingers over the coloured thread, needled into place by a young girl, who now sleeps a few metres away, much older but no less headstrong.

And she's not asleep.

"Natalie, you're still awake! You'll never get up in time tomorrow."

I've got stitching of my own to do.

Do you have a 3D, almost living historical document in your family? I'd love to know what other little treasures are out there, being passed along the generations.
Posted by Girl Clumsy at 11:35 PM