The Trouble With Bochenski

Growing up with the surname "Bochenski" meant a constant battle against mispronunciation and mispelling. One day I'm going to write a one-woman stand-up comedy show called "The 'C' Is Silent", which will act as a stern warning to those who would CHOOSE to give their children stupidly spelt names, particularly first names.

But it seems this is not a modern problem.

In Vanuatu this week to work on the memoirs of my esteemed Grandmother, Queen Patricia Zhindhu Khambatta Bochenska (the "Queen" being the only made-up bit), I have discovered proof of the English-speaking world's inability to handle this simplest of Polish names.

My Gran married Maciej Tadeusz Bochenski in Plymouth on April 28, 1948.

﻿ ﻿The happy couple received a stack of congratulatory telegrams, which I discovered while snooping through Gran's album collection. They're lovely things, slips of yellowing paper, topped with the crown symbol of the Post Office, almost 64 years old to the day. But gee, they make for jolly reading. 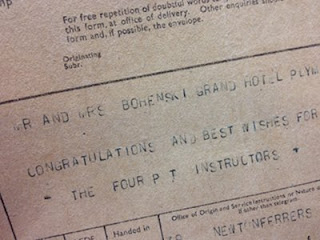 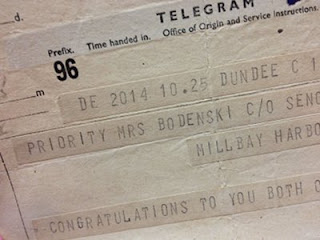 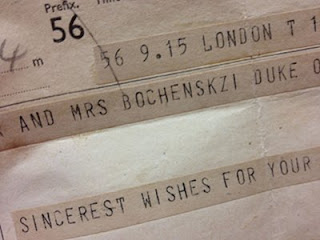 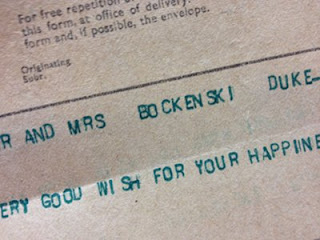 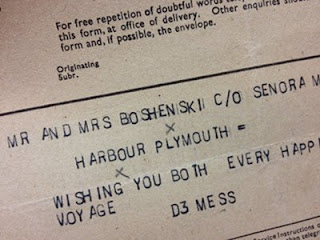 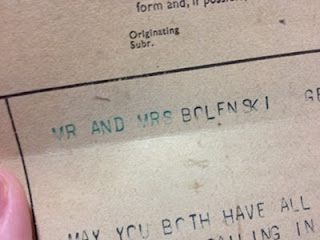 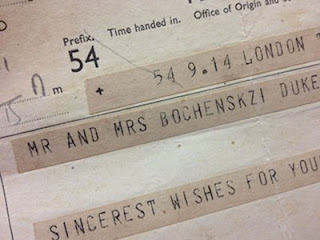 It's somewhat heartwarming to think of all those confused exchanges at the Post Office, between well-wishers and telegram operators, struggling to work out if there's an extra "z".

I've discovered all sorts of other fun facts about my grandparents' wedding and first flush of marriage.

Gran stopped in at a bakery in Padstow, waiting for the change to Plymouth, to order the cake, as she'd heard there was a good bakery there. It turned out the baker had been a navy chef, and knew Gran when she was with the WRNS in Beirut. He made her a nice three-tiered cake.

My Gran and her mother took the 4 o'clock train from Plymouth back to London, so she could get "demobbed" from the WRNS. So there was actually no wedding night, and in fact, it would be FIVE months before they were actually reunited for a proper honeymoon. The merchant ship Grandad had got a job on changed its mind and refused to take Gran as well. So she returned to London to live with her mother, until she was eventually able to get a seat on a converted Lancaster bomber and fly four days across North Africa and the Middle East to join him in Bombay.

Grandad booked them a honeymoon in the hills near Bombay, where Gran had holidayed as a girl growing up during the Raj. While they were there, a devastating hurricane hit Bombay, sinking around 15 ships, including Grandad's. All their possessions, navy clothes, wedding gifts and more went down with it.

And BEST of all! When my Gran first met my Grandad and they began courting, he was known as Rocky. Apparently, the Polish mariner used to rock from side to side while standing. Perhaps it was his remarkable sea-legs getting used to land, who knows. But the whole time, she knew him as Rocky. It eventually dawned on her that she should probably ask him his real name, in order to, you know, pledge her life to his at the altar and all that. When did she finally do it?

Why, on their wedding day of course.

April 28, 1948. A day for getting married, and finally finding out your beloved's first name.
Posted by Girl Clumsy at 10:37 PM