Critical Hit wrapped up last night; thanks to everyone who came along to support the show and bestow their laughs on the performers.

If you didn't make it along, you may not have realised that our set piece was a giant twenty-sided die, known in role-playing parlance as a "D20".

It wasn't actually a full die, but the facade gave a pretty good appearance of solidity. I say "appearance", because we had to dismantle it after the final performance:


To be honest, the destruction had begun earlier, during the show, when I was playing a destructive demonic creature known as a "Magic Moose-ile". Left onstage to run riot (narratively appropriate, of course), I realised that we didn't need the D20 anymore. So I jumped into the space behind it and started kicking it out from within (which is why it's already half broken in the video above).

I must say I really loved doing that. There's something very satisfying in destroying something in the full knowledge that there are no repercussions for doing so. The set would've been broken up anyway; I just did it in a speedier, more flamboyantly violent way.

We also finished our Map of Ages! Six different locales within the world of Delphar, as the lands of the Critical Hit universe came to be known. 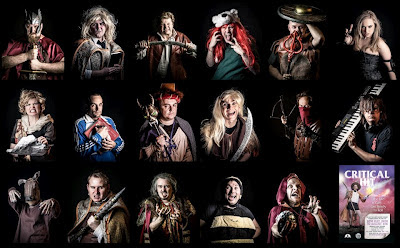 Pretty darn amazing, and just as entertaining that Dungeons and Dragons!

You can check out more about ImproMafia here. As always, I'm very proud of this company - full of good people with great ideas and brilliant stage presence. Thank you all again!