An Apple in Burma

I thought I'd share this series of photographs I captured in Bagan, Myanmar (Burma) on the 15 October.

We were waiting to watch a local performance, and my father was using his iPad as a camera. This young lad, in his father's arms, had lovely responses to whatever my Dad was showing him on the screen. 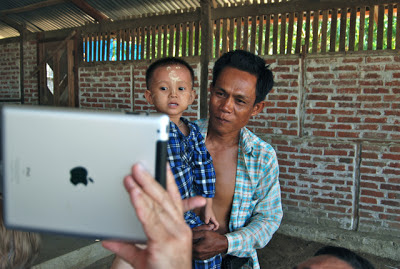 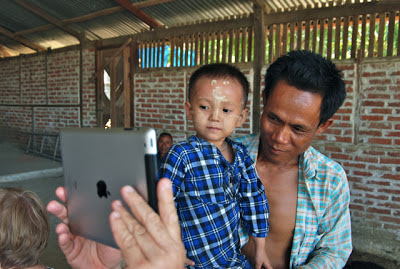 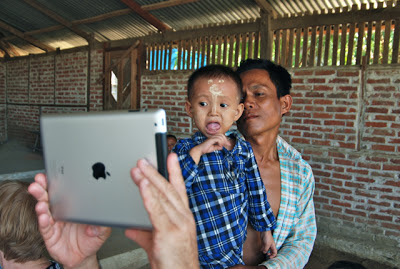 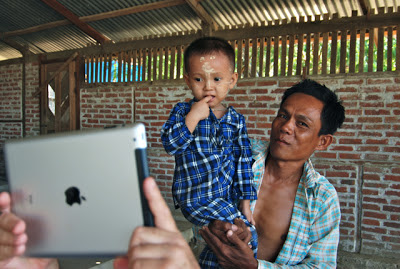 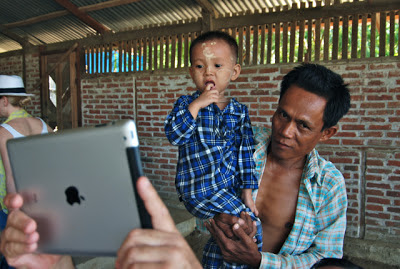 As a side note, the yellow-ish paint on the boy's face is thanaka, the natural beauty product/sunscreen/mosquito repellant that is still worn by the vast majority of Burmese women and children (and some men, but not so much). It comes from wood of a tree related to the lemon tree, ground down and mixed with water to form a paste. The sensation is rather like having a clay mask on your face - when I rinsed my trial application off, my cheeks were left rather red and blotchy! The most common application of thanaka is to the cheeks in a sweeping motion with a finger, similar to how Western women might apply blush. But there don't seem to be any rules - it's also applied to the nose, forehead, the whole face sometimes - and it can also be shaped into patterns like leaves or love hearts on the cheeks.

I rather liked one of the other reasons it's worn commonly - it's seen as a sign of mental health. If a women doesn't take the few minutes every morning to apply her thanaka, it's seen as sign something could be wrong. As village life is still the predominant way of living in Myanmar, there's no doubt your friends and family would follow that up.
Posted by Girl Clumsy at 11:23 AM