My father spotted them first.

"What's this? Mr Bean?" he said, pointing a row of square tin boxes behind a glass partition in the cigarette vendor's small stall.

"Oh yeah," I replied, recognising the gormless face of Rowan Atkinson's popular character peering out towards the busy Prome street. 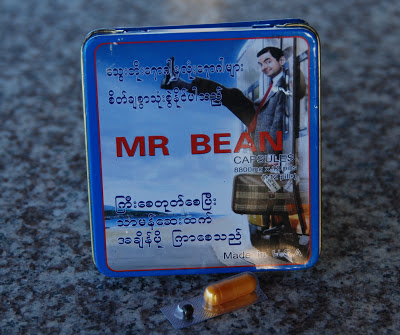 "Are they cigarettes?" said Dad.

"Don't know," I said, leaning in to see if there was any English among the Burmese script on the front of the box.

"They're pills," I said, after seeing the word CAPSULES, followed in smaller print by "12 Pills".

"What are these for?" I quizzed the street vendor, a young bloke in a navy t-shirt, perched on a wooden slat of a seat behind his merchandise.

He grasped my question and made a body builder gesture, flexing his biceps, raising his fists to the ceiling, not four inches above his head.

"Big and strong!" he said enthusiastically.

His physical and verbal clues led me to think it must've been a supplement, such as a herbal steroid, something like that. It didn't explain the picture of Mr Bean, but then neither, it would turn out, did the actual contents.

"How much?" I asked. "One thousand five hundred kyets," he replied. I nodded, and look down to pluck the necessary notes from my little purse, a relic of another market encounter. When my gaze returned to the vendor, he was using scissors to cut one capsule free from its brothers in a blister pack of six.

"One thousand five hundred for one," he explained, seeing my confusion.

He held out the larger blister pack.

"I give to you, as present for friend," he smiled, taking my proffered kyets but waving my hand away when I went for more.

He opened up one of the Mr Bean branded tin boxes and placed the one cut-out pill inside. He snapped it shut, and handed it over to me.

"Desube," I smiled in thanks. He nodded, still smiling.

I walked a few metres away from the stall to rejoin my father, who had watched the exchange through a slight flu haze. We had come out for a brief late afternoon stroll to enjoy the dappled sunshine and stretch our legs along Prome's busy shopping streets.

Now, I turned the box over in my hand to discover another picture of Mr Bean, this time looking alluring at the camera while tracing a bare foot in the sand. 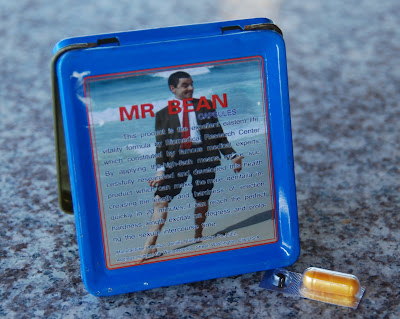 Superimposed on top of the image was some English text. I began reading aloud:


... at this point I began laughing, and put my hand on my Dad's shoulder to steady myself.

... which can make the male genitalia increasing the length and hardness of erection quickly in 20 minutes, it can reach the perfect hardness, length, excitati on degress, and prolonging the sexual intercourse time.


By this time Dad had joined in the laughter.

We took the box back to the RV Pandaw, our floating home, where I charged into the cabin I was sharing with my grandmother and roused her from a nap.

"Bought you a present, Gran," I belted out. "It's going to change your life."

"Huh?" she murmured, still groggy from her own bout of the flu and confused by the sudden noise.  I started reading the same text I'd read to my father a few minutes before.

Gran started laughing. "How does that help me?" she cried. 'Well, you like Mr Bean," I said. "Not that much," she replied.

The tin box did the rounds on the Pandaw that night, resulting in guffaws only slightly exaggerated by pre-dinner cocktails and during-dinner wine.

What nobody could understand was - why Mr Bean?

Rowan Atkinson's awkward, gangly, accident-prone character is hardly the first thing that comes to mind when you think 'virility' - or as the vendor had put it, "big and strong". And yet, there he was, the face, or perhaps, the phallic-ly symbolic leg, of a local stiffy pill.

The best our theories got was an association with the word 'bean'. Bean Stalk or Bean Pole could indicate desirable "length and hardness", as the description put it, while the expression "full of beans" could account for the claims of "longer intercourse time". But do those terms adequately translate? Or do the Burmese simply think Mr Bean's a hornbag?

Chances are I'll never really know. I guess we'll just have to trust that the famous medical experts pulling overtime at the BioTechnical Research Centre know what they're doing.

Have you ever come across an awesomely unexpected celebrity product "endorsement"?
Posted by Girl Clumsy at 9:12 PM