This is probably quite a Brisbane-focused Remember November entry, because I'm not sure how far and wide the tuckshop spread of Freers crisps was.

It's very difficult to find any photographic evidence of the once-beloved snackfood company through image searches. As memory serves, Freers folded sometime in the late 90s, before the internet's true purpose as a nostalgia attic came to the fore. And being as how its products were delicious, but wrappings disposable, it's understandable why no packaging has survived to be snapped, suitable filtered and uploaded.

So I've resorted to drawing a dodgy paintshop-style picture of my favourite Freers product: 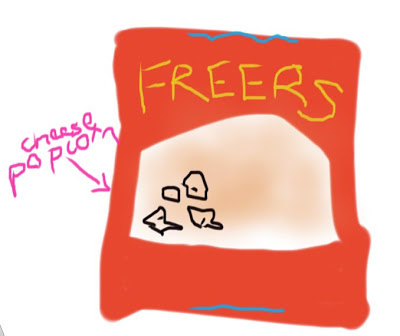 Ahhhh, you can sense the memories coagulating in the drool seeping from the corner of my mouth.

Freers made a few popcorn varieties, but cheese was the only one I ever went for. There's something about the cheesiness of cheese popcorn that comparable cheese snacks (Twisties, Cheezels, Cheetos) can't actually replicate. I'm not sure if it was a particular type of chemical they put in the seasoning, but boy. That shit was like catnip to primary-school-aged Girl Clumsy.

Our tuckshop stocked 40g bags of Freers popcorn for 40 cents. 40 CENTS. My peak Freers-gorging period was 1991/1992, so this wasn't that long ago. As I recall, Mars Bars were about 80 cents at the time, so even for a chocolate-lover like me, Freers popcorn represented the best possible use of the occasional dollar my mother would give me for a tuckshop treat.

I'd saunter up from the Year 6/Year 7 lunch area once, maybe twice a week, shiny gold dollar clenched in my sweaty, nail-bitten hand. I'd purchase two bags of Freers cheese popcorn, and use the remaining 20 cents for a Funny Face icy pole. I'd down the Funny Face first while the ice was still sharp and full of cola or raspberry flavour. Then I'd bust open the delightfully light yet full Freers bag, drinking in the scent of all that virgin cheese popcorn goodness.

The contents would disappear rather quickly after that.

I'd save the second bag for after school, or eat later at home, secretly in my bedroom, or out for a walk, somewhere no one else could find me and demand some. I didn't like to share.

Sadly my primary school days came to an end, and with them my ready access to cheap delicious Freers popcorn. My high school tuckshop did have deep fried chicken-and-corn bars, but they could never inspire the same sort of devotion.

Freers could occasionally be sourced at Franklins supermarkets, but the popcorn varieties seemed to be discontinued; and then the company wound up, forever dashing my hopes of a cheese popcorn revival.

America seems to have dozens of cheese popcorn options available, but for some reason Australia hasn't embraced that particular form of junk food. The only place I can source it now is from Kernels Popcorn at Chermside, and it's relatively expensive. Certainly no 40 cents, that's for sure. And it's still like catnip for me; I really have to ration out my visits lest I wind up on A Current Affair as some sort of demented popcorn hoarder, sitting Smorg-like on my own increasing body weight of air-popped snacks, batting off nutritionists and sensible people with tubby lard arms.

So it's probably for the best that Freers wound up. But still, I mourn them.
Posted by Girl Clumsy at 10:28 PM