The Most Amazing Shop

It wasn't always The Most Amazing Shop.

"Originally it was Carol's Shop," says Carol, owner and manager, cutting plastic-covered sea shells from protective foam wrapping and placing them onto the counter in front of her.

"But people kept coming in and saying 'This is the most amazing shop!', so eventually I changed the name.

"People come in here for something odd. Something different."

The Most Amazing Shop delivers.


North Stradbroke Island is a 20 minute water taxi ride (or 45 minutes by vehicle ferry) from Cleveland. It's renowned for its beautiful beaches, great surf, fishing, untamed bushland and sand-mining operations.

The Most Amazing Shop lies on the outskirts of Dunwich, along the main road drivers take to the island's other main settlements of Amity Point and Point Lookout.

It's impossible not to notice. Red vertical flags crying "Open" sit on the kerbside, and the sloping front yard of the shop is crammed with terracotta garden pots and other strange adornments, including life-size hooded Death figures, Chinese guardian lions, large garden gnomes, gargoyles, a torso of a male mannequin and even dinosaurs of various sizes and species. 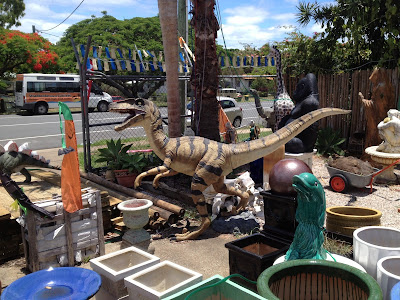 A whiteboard lays out the rules of entry:

Children must be accompanied by an adult at all times
Bring your money!
Buy nothing? Gold Coin Donation Required -> Karla's New Wheelchair

The ante-chamber - what looks like a garage as once was - contains racks of clothing. Most looks pre-worn; there's a formal dress area, a kiddies' clothes rack, one for swimsuits, another for Eastern-inspired embroidered gowns like saris and chongsams.

There are loose barricades at the back of the space, but they too are stacked with things - I find a hooded devil's cape sitting under a pair of novelty buttocks at the end of one row, and wonder how those two came to be piled together.

A few steps to the left of the clothing room lies the entrance to the shop proper. The strains of the Chicken Dance ring out as I near, and truly it's the most appropriate music for the strange circus of inanimate objects that I subsequently encounter. 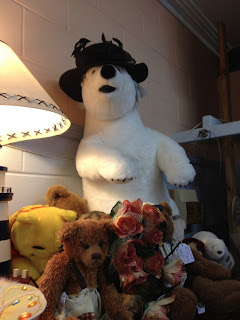 Every conceivable space is crammed full of disparate offerings.

On the floor, a stack of VHS tapes topped by Shanghai Noon.

Nearby, some heavy vintage irons.

In a corner, dozens of colourful fantasy figurines such as fairies, dragons and wizards.

A set of shelves packed to the edges with coloured glass, mismatching plates and gaudy jewellery. Prefer the shelf? That's for sale too.

A large stuffed polar bear sits atop a loose pyramid of other stuffed animals, but its hat adorned with eucalyptus leaves detracts somewhat from the Arctic King of Plush impression.

Racks full of shoes, but no shoeboxes in sight.

At the back of an aisle, propped up against a mattress, a nude porcelain female figurine. 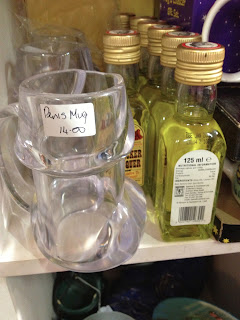 It's the kind of shop I used to create as a child in my parents' rumpus room - all leftovers and old toys and shoes my mother no longer wore. I'd price them using little dot stickers purchased at a newsagent for a few dollars for several hundred; we would barter and pay for goods using a large pile of otherwise useless Polish Zlotys.

Perhaps my assessment is harsh. One person’s trash is another’s treasure and all that. You could say it’s the philosophy of Kitsche - there are no terrible surfaces without a beautiful depth.

“I get things from lots of different places,” says Carol. “I have different suppliers, I go to auctions, and I visit Bundaberg and the Darling Downs a lot. I always stop off at places when I travel.”

So it’s as much about Carol’s love of collecting as it is about customer’s love of shopping?

“The kids are always angry at me because I’m forever stopping to look at shops. Sometimes places are going out of business so I can buy things up.”

Those kids include Karla, who was just 12 years old when she became a quadriplegic after a swimming pool accident.

“We still don’t know what happened exactly,” she says.

“But whatever she did, it shattered her C5 vertebrae. But that’s good, you know. She’s got some feeling, if no movement. You work with what you’ve got.”

Karla’s now 27, and is embarking on her Masters in counter-terrorism, after finishing a degree in political science.

“She can’t do any more than two subjects at a time. But she’s always leaving things until the last minute!” says Carol, shaking her head and half-grinning.

“She’s still got a brain on her, as long as she sticks to her brain food.”

Her ‘brain food’ is a special drug from the United States that seems to keep Karla focused and productive where others have failed.

Donation bowls scattered around The Most Amazing Shop appeal for contributions towards a new wheelchair, particularly if the patron doesn’t buy anything. I threw a few dollars in before striking up my conversation with Carol.

She reveals Karla has finally received that new wheelchair recently, and donations now will be used to buy a $1000 attachment for her iPhone and iPad, so they stay propped up and charged throughout the day.

“If she drops them, or they slip off her lap, she can’t get them, she has to wait for someone to pick them up for her.”

She reveals she doesn’t live full time on North Stradbroke Island, that in fact the family is based at Sunnybank on Brisbane’s southside.

“I started the shop basically as respite from Karla,” she admits. “It’s not good for you, to be a mother and a full-time carer.”

Carol, a former truck driver before Karla’s accident, says it was the best way to force disability service providers to get her daughter carers.

“Thank goodness now she’s fully-funded. But we had to fight for it.”

She names a service provider well-respected for its education campaigns about spinal injury, and fumes about what she perceives are their shortcomings in the area of care.

"They don't do anything," she says, shaking her head as she shovels novelty plastic penises into a box under counter.

“Well, they’re very good at giving prevention talks, but they forget that sometimes accidents happen, and they’re accidents. You can be as well-informed about not diving headfirst into shallow water as you like, but that’s not going to help if you have a tyre blow-out and roll your car. You can’t prevent accidents – they’re accidents.”

She hopes the National Disability Insurance Scheme will help future accident victims, even if it’s not much use now to Karla.

“If it will make it easier for them to choose their care providers, it’ll be good. We had such a fight.”

Some more customers enter the shop and I use the opportunity to poke my head around corners I hadn’t yet ventured into.

The shop is full of motion-sensitive toys, including a rude garden gnome, a talking skeleton, and a plush koala that laughs more maniacally than Vincent Price’s Thriller voiceover. They’re both strangely delightful and charmingly off-putting.

Eventually, I find a gold statuette labeled “Beer Drinking Champion”. It has no top on the packaging, and, like many things in The Most Amazing Shop, is covered in a thin film of dust.

At our office Christmas party, I won a traditional award given out to the staff member responsible for the most impressive stuff-up. Missing my very first week on the job due to influenza secured the gong for me – but I subsequently lost the trophy during our night out, which rather puts me ahead of the pack for next year’s biggest stuff-up award.

This statuette features a beer-bellied man with his head tilted back, throat open to receive the goodness from a stein he’s holding. When you press a button, it plays a song about how much he loves beer.
I decide this is a good replacement option, and go back to the counter.

As she rings up my statue for $12.50, Carol tells me she had an unusually busy run in the lead-up to Christmas, and is picking up again in the early New Year.

“I get the passing traffic between Dunwich and Point Lookout,” she says.  “The buses stop too.”
“But some people just thinking I do garden pots, because of what’s out the front.

“They don’t realize you can’t put other things out there, because they’ll get stolen, or the sun fades them. There’s a whole lot more if they come inside.”