A Bubbling Source of Inspiration

Chez Clumsy is being renovated.

Starting within hours, in fact, of me typing this.

It's been months in the planning, and now we're at a point where most of the to-be-renovated space is clear, a metric f*** ton of clutter has been decluttered, and the old bordello is ready for her facelift.

Here's a picture of the kitchen with a slice of the balcony area as it was mid clear-out - you can get a sense of the mess: 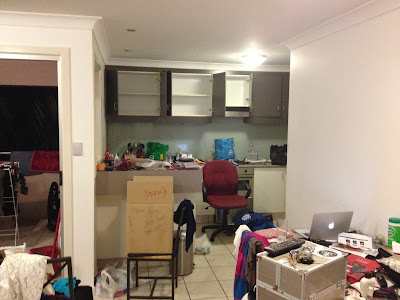 If you're my father reading this, you will be currently on a boat somewhere off the west coast of America yelling "What mess? That's how it looks normally!" and feeling very proud of your joke.

If you're my mother reading this, you will be on the same boat, probably rolling your eyes at my father's joke, but secretly agreeing that you're not sure how the daughter of two neat-freak parents managed to turn out a slob.

Well, slob I am, slob I shall probably always remain.

However I have been taking a rather perverse pleasure in the act of decluttering.

Every bag of rubbish taken down to the bins is a small victory in the never-ending war against stuff.

I'm not even being as brutal as I probably should be. Once the renovation is complete, I can see myself ditching more things because they a) don't suit, b) are shabby or c) I just don't need them.

It can be hard to part with certain things - particularly travel mementos or little personal trinkets received   as gifts or picked up randomly somewhere. 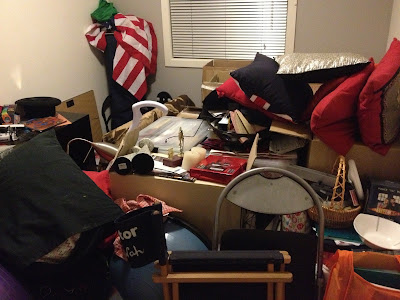 And it's not to say I don't like stuff. I'm just seeing the attraction of less stuff. I want to be more agile in the spaces where I exist. I think I just want to be less. It ties in a bit with my desire to lose weight (not that anything has happened there; if anything living off mostly take-out and having no time over recent weeks probably means I've stacked on again). Some part of me feels that by being less, I will actually be more - more active, more creative, more capable of managing my time and more of a contributor.

It would also just be nice to not live in a midden.

Another experience that is relatively new for me is the willingness to shell out for more expensive items even though there are cheaper options available.

I realise I've become a bit of an appliance/fitting snob.

It's not that I'm flashing cash around willy-nilly - I'm still wheeling and dealing and buying on discounts and specials. But when The Wah and I visited a big builders' discount-type warehouse recently to look at taps and sinks, all I could really see is how.... cheap... they were.

You start to think - I'm paying out a fair slab of the folding to get a custom-made kitchen. It's not the Rolls Royce of kitchens, sure. Maybe the high-end Hyundai of kitchens. But I still don't want to fit it with Bargain Bob's Retreads 'R' Us tyres, you know?

So all of my appliances are Smeg.

And I've forked over more to get some swish Swiss fittings. 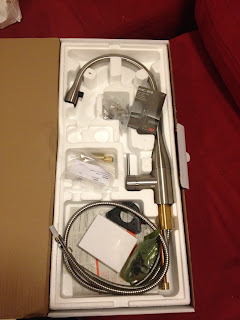 The instruction sheet for Eve refers to her as "a bubbling source of inspiration" for your kitchen.

It's airy promotional material, sure, but you try brushing your fingertips across Eve's stainless steel curves and tell me she isn't one sexy culinary muse.

I look forward to sharing the final results of the renovations with you - a few people have been laughing at my optimistic attitude that it will all run smoothly, but I have no reason to fear at the moment.