You expect, when you renovate, to make a few little discoveries here and there.
For example, it turns out our kitchen water pipes all run from the ceiling down, not the floor up. This means rejigging a few things, but it's one of those small hurdles that are simply a part of the renovating experience.
What we did not expect to discover, on a sneaky Tuesday evening reconnoissance, was this: 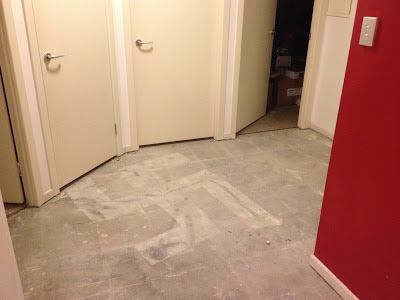 "Is that.... is that a swastika?" I heard The Wah say as I was checking out the space where the kitchen used to be. I spun around and stared at the ground.
"Ah... that's ... that's a swastika!" I confirmed. Then shock. "What is a swastika doing in my house?!?!"
But there was no denying, there was a swastika in the house.
Painted on the concrete, then tiled over.
For six years, The Wah and I - and all of our friends and family members - have been walking upon the world's most infamous insignia.
Our urbane, sophisticated inner-city unit had all over a sudden become an Anti-Semitic hate den, or perhaps a repository for hidden Nazi gold. 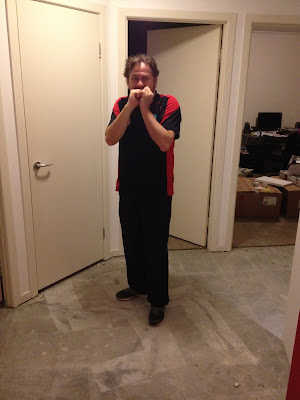 Of course it begs the question: WTF? Who PAINTS A SWASTIKA ON A FLOOR?
We know our apartment building used to be an office building before it was converted into flats in the early 2000s. We don't know who did the conversion - but we think they, or their sub-contractors, might have had at best a terrible sense of humour, and at worst, DIY tattoos and a dire need for therapy.
The problem is of course - how do we get rid of it? Sure, we'll be re-tiling, but if we don't destroy the swastika underneath, we will forever know it is there, lurking, like a Gestapo officer in a ghetto. We will be compelled to blurt out to anyone unfortunate enough to walk over that spot "DO YOU KNOW YOU'RE WALKING OVER A GODDAMNED SWASTIKA?" and then people will start questioning whether we're obsessing a bit too much about the swastika, and they might think perhaps that we sympathise or share those views, and the next thing you know A Current Affair will be bringing in a hidden camera and we'll end up on hate crime charges and that Girl Clumsy and The Wah always seemed so nice, but then it's always the nice ones who turn out to be rotten fascists...
NO! Like Churchill, I will not surrender.
We need ideas. I'm not a big believer in negative energies and whatnot, but I am a big believer in not having a f***ing swastika under your tiles. So what image should we paint or scribble over the top? 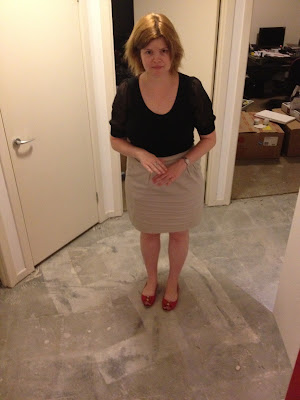