He Died With a Felafel in His Hand.... again

Because there's nothing tastier than a reheated kebab... 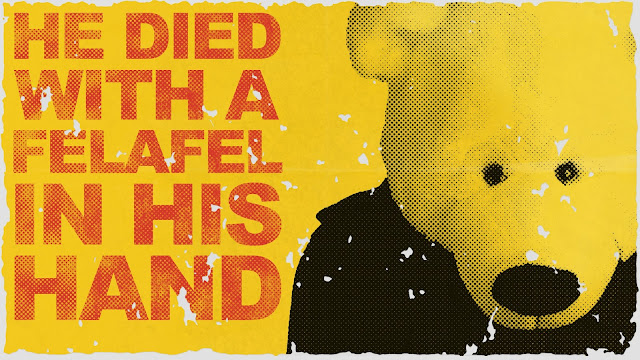 That's right, we're bringing Felafel back, in much the same way Justin Timberlake brought sexy back in 2006.

Author and generous supporter John Birmingham made the official announcement via his blog last week, but I thought it might be prudent to give a bit of background on how it all came about.

Long time followers of the Girl Clumsy wunderblog (which has been Gobe-like in its sparseness of late, and this is part of the reason why) may recall I first directed at production of Felafel at the Brisbane Arts Theatre back in 2009.

It was a huge success for that beloved theatre of mine - it helped the place get through a terribly rocky financial time and enjoyed a great positive response. Except for one ABC radio home reviewer who described it as a show "you wouldn't take your wife to". We put that on a badge and sold it by the truckload.

Anyway, we returned for an encore season in January 2010, followed just a few months later by the premiere of its sequel, The Tasmanian Babes Fiasco, written especially for us by playwright Simon Bedak.

The trilogy was completed with 2011's How to Be a Man, loosely inspired by JB and Dirk Flinthart's guide for young men.

At the tail end of last year - or was it early January? I can't remember - I was at the Brisbane Powerhouse for some other reason and I started thinking about how I'd love to put on a show there, but how the financial risk was problematic.

Then I remembered Felafel - a show I know back to front, a popular work with a reputation that might just put bums on seats and give me the best chance of a self-funded show breaking even.

I immediately texted Simon Bedak, saying "What do you think about doing a run of Felafel at the Powerhouse?"

After establishing that my contact number wasn't in his new phone, we got to talking, and agreed that the idea had merit.

I touched base with the wonderful cast of actors I've surrounded myself with since those first Felafel days. They were excited by the idea, bless them. I couldn't have gone ahead with it if it weren't for their encouragement and enthusiasm.

I began negotiations with the Powerhouse to find a suitable date. In late April we settled on a week-long run in the Visy Theatre during the first week of October, and by June we had begun rehearsals.

It's pretty much a perfect scenario. Six shows across five days, after a few days to bump in and tech the show. It means the cast could take one week off their day jobs (if they were able to) and enjoy being a working actor for a week.

A limited season means anyone keen to see the show needs to book in. A familiar show means less stress for me as a director (and an actor, hint hint).

However, I don't want people to think this is a carbon copy of our 2009/2010 production. Of course, the script remains the same, but the staging will change based on the Visy Theatre's thrust, as opposed to the BAT's proscenium.

We're also updating and refreshing aspects of the show that we created, and returning to those beloved characters has given us a chance to really ramp up our acting game.

Bottom line - it's going to be a whole lot of fun.

I'm funding this project, and I'm really proud of myself for doing that. It's given me, and by extension my friends in the cast, a real sense of ownership and dedication to making it the best possible product we can. Of course, we've always done that - we're just stepping that commitment up again.

So I hope you consider booking tickets to He Died With a Felafel in His Hand.

I've tried to keep the tickets affordable - $39 for adults, $35 for concessions, plus the Tuesday night show is a preview with all tickets $30.

At the end of the day, I will come out ahead no matter what happens with the cash - the experience itself and production knowledge gained is priceless.

But it would be wonderful to give my actors killer audiences at each and every show. They're damn professionals and deserve to be seen.