My father retired recently. He's still working the odd job as a marine pilot, but he now finds himself with a whole lot more spare time to spend at the pokies beating The Man at his own game.

I am being cheeky here of course; my Dad is the eminently sensible kind of person who insists I put extra money into my superannuation, and so I'm sure his trips to the Kedron-Wavell Services Club are kept entirely within affordable means.

One of his retirement gifts was an Apple TV which, being a gadget nut, he had set up within 24 hours of receiving it.

I popped over this evening for dinner and to welcome my Gran, the esteemed Queen Pat herself, into town on her latest visit. She assures me that her arrival from Vanuatu was all about seeing family, and absolutely nothing to do with the recent seizure of 750kg of cocaine in Port Vila.

Après le dîner, my Dad busted out the YouTube app on the Apple TV.

"Oh! I have the YouTube," said my Gran cheerfully, still impressed with her recently installed broadband WiFi connection. "I've been watching Yes, Minister, and The Two Ronnies."

Gran picked at her cuticles as she told me about the YouTube - that's Yoo Tyoob in her English accent, not the ocker Yew Chube - and I picked at my cuticles as I listened.

The family resemblance is strong.

Dad found the clip he was looking for, and it started playing.

"The Grom!" he yelled triumphantly.

"The what? Your Daddy was on the Grom," said Gran. 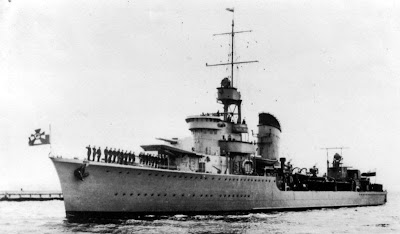 My grandfather, Maciej, was an officer in the Polish Navy, part of the section that escaped after the German invasion and put themselves under Allied command.

The Grom was a speedy destroyer which ran gunfire support missions during the Norwegian campaign. She was built in England and her name was Polish for Thunderclap. Her twin, the Błyskawica, can still be seen today in the port of Gdynia. Her name meant... you guessed it, Lightning.

The Grom was apparently feared by Germans for her kick-ass determination to kill as many of them as possible - although local civilians who copped the friendly fire apparently weren't as impressed.

At the time, Grandad was a navigator, but also manned the guns, which left him deaf in one ear.

He was obviously thrown into the water - or got himself into the water quickly - when a German bomb hit the Grom. He later told Gran he watched his fellow sailors' faces through the portholes as they struggled but failed to best the rushing water.

Maciej was rescued after an hour in the icy water. Apparently his first memory was trying to punch out rescuers on deck of the ship that retrieved him - he thought they were stealing his lifejacket when it fact they were trying to take the sodden garment off him.

As the clip finished, I thought about just how much of a badass my Grandad must have been.

"That was when they made men as real men," my Gran mused aloud.

"No, they're namby-pamby things."

And I'm reminded once more that it's Gran who's the real badass.