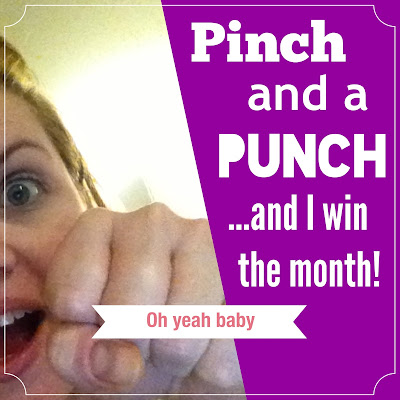 I'm not exactly sure when the competition to say "Pinch and a punch" first began between The Wah and I.

All I know is that I usually lose. The Wah will pop up, usually under the guise of giving me a hug, which of course suckers me in.

But then it comes: the bite of fingertips into flesh, a stinging reality bomb that is ten times worse than the friendly follow-up cuff to the shoulder.

"Pinch and a punch!"

Cue The Wah flashing an impishly smug grin while I jump up and down yelling "Not again!"

Well! I remembered this month. BOOM.
Posted by Girl Clumsy at 12:00 AM