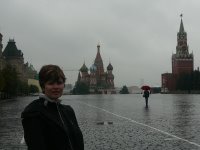 It may be dreary, but Red Square is still impressive! You can see the ice-cream cone spirals of St Basil's in the background. 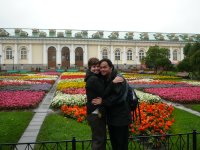 Outside the Armoury Chamber in the Kremlin. The Armoury contains wonderfully opulent items from the bygone age of Tsarist Russia. Including Catherine the Great's wedding dress (she had a TEENY waist!) and coronation gown (slightly bigger waist by then). 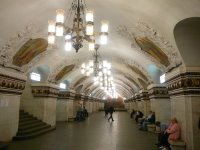 Is it a palace, or great presidential estate? No, it is in fact, the Moscow Metro. All the stations are amazingly grand and beautiful. You would think they had been built before Communist times; but no, they were actually built mostly by the Communists, to emphasise how great they were, and to show the people how rich the USSR was (despite the fact those self-same Russians were taking the Metro to get in the bread queues). 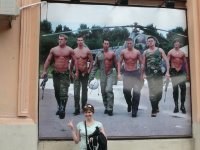 Hello, boys! Natalie finds a male strip club. I wonder how long it will be before heavy vodka abuse turns those six packs into kegs? 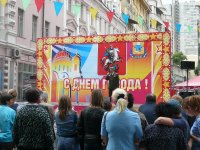 I loved this guy. Standing in full military gear, singing very somberly, despite the whole day being a party to celebrate Moscow's 800th birthday. 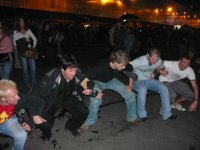 A bit of Cossack dancing out back of Red Square, during Moscow's 800th birthday celebrations. There was a massive fireworks display and everything. Muchos fun.
Posted by Girl Clumsy at 9:33 PM