Can you tell me how to get...how to get to Bochenska Street?

When I went outside today, I kinda looked like this guy: 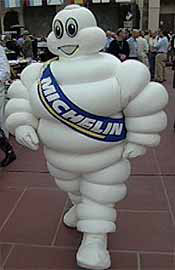 Yup, with the fetching sash and everything. And you know, stumbling around one of Europe's cultural capitals like some sort of unbalanced overweight inflatable advertising gimmick wouldn't be so bad if I was actually warm. My fleece and waterproof jacket do ward off the rain and wind, but what I really need are battery powered clothes that send a current of warmth around my body, heating my every pore. Kind of like a wetsuit, only without that embarrassing "pee yourself to warm up" option (you obviously don't want to blow the electrics).

It's not that I didn't know it would be cold here - of course I knew. But the knowledge of a Polish winter can't really prepare for the experience of a Polish winter. And actually, it's the warmest December they've had here for some years. Apparently they should have 10 inches of snow and temperatures well below zero by now. Instead it's practically balmy - hovering between 2 and 5 degrees. Lucky I packed my swimsuit, eh?

Krakow is a lovely city though despite the cold. Officially founded in 1257 (but settled long before that), Krakow is awash with history. Churches pop out at you from every corner; overlooking the city is the marvellous Wawel Castle; and the market square in the Old Town is the biggest in Europe. In fact, we were welcomed to the square today by a mock riot, commemorating the 25th anniversary of the introduction of martial law in Poland. How's that for timing? There was a tank and fake military police and protestors with Solidarity posters and everything.

My grandfather Maceij was Polish - an officer in the Polish Navy during WW2. My grandmother told me once that he refused to return to Poland after the war due to the Communist rule. Today I found out why - he probably would have been arrested, and possibly imprisoned or worse. In 1940, after Poland was divided under the Molotov-Ribbentrop Pact, the Russians rounded up several thousand of Poland's intelligentsia and had them shot near a town called Katyn. There are estimates of up to 10, 000 deaths in that time - possibly more. They wanted to make sure no Polish politicans, military leaders or university professors would be able to lead the people in a revolt. Several thousand managed to flee - my grandfather no doubt by sea with the navy. Our tour guide Monica told us today that after the war, many officers who returned were locked up - ample reason for my grandfather to avoid returning home. The mass graves near Katyn were discovered later during the war, but the Soviets blamed the Nazis for the killings, and it was only in 1990 that Gorbachev admitted that Russians had been responsible. My grandfather died in 1989, so he never got to hear the official truth - though no doubt he knew during his lifetime who had been behind such an atrocity. Moments like that - when you realise just how connected your family's history is to world history - are arresting.

Not that the Polish didn't suffer enough under the Nazis, mind. Tomorrow we head out to Auschwitz-Birkenau, to stand right in the middle of the Third Reich's biggest concentration and extermination camp.

And finally...one place I will be visiting over the next few days is BOCHENSKA Street! That's right, there is an honest-to-goodness street here in Krakow called Bochenska Street. I found it on the wall map located in our hostel's reception. Couldn't believe it. The only other Bochenski Street I know is the one named after my Grandad in Port Vila! ;) For those of you confused, Bochenska is the feminine version of Bochenski. I don't use it as Australians don't really get the custom. But it's still the same name, and dammit, I'm going to get a photo of me on my own street!