Apologies up front, but this is going to be another one of those boring posts about my apartment that seem to comprise 99.9% of my blog these days. However, this time there are pictures to add some visual interest. 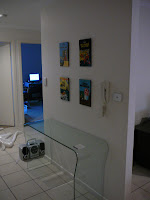 This is my hallway. Note my incredibly sexy "Orbit" clear glass console table (thanks to my new dealer, Freedom). Note also my wonderful Tintin block-mounted comic-book covers (thank you, Hong Kong markets). However this wall was lacking some of what my mother would describe as "oomph". The flat, as yet, just isn't 1920s Parisian bordello-y enough. Not brothel-y enough!!!

The solution? A last-minute, hare-brained scheme to paint the wall red! Huzzah!

Now despite being the daughter of a woman who has a savant-like ability to paint perfect feature walls, I had never actually done one myself. So yesterday morning, Greg and I hastened to Bunnings, that modern Charybdis where many a better home handyman than I has lost hours - nay, days - to isles of Taubmans colour charts, petrol-powered leaf blowers, Australian natives and water-efficient shower roses. I was lucky to have Greg with me, as his doggedness in the face of brain-snapping D-I-Y bargains ("Look honey! Two-for-one toilet seat covers!") kept our mission on a steady path. With the help of the lovely Stacey (hold onto her, Bunnings Cannon Hill), we ended up picking two different reds to try out on some cardboard, before making our final decision. After overnight testing, we decided on Dulux Red Box, which seemed dark on the little sample card, but suited the apartment - and most importantly, matched the sexy red lounge suite. 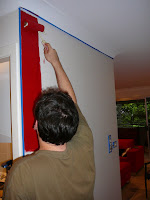 This afternoon we began operations. Here you can see Greg beginning the paintwork, after first masking the areas of hallway we DIDN'T want spattered with Red Box (hmmm, not a great image, that one).

I proved fairly useless through the painting, as we only had one roller, and Greg had not approved of my technique when we were painting the samples. "You didn't get enough paint on, and look, it's all patchy!"

So I spent my time mopping up drips and spotting areas that needed more coverage. After the first coat, I also indulged in some Shakespearean impersonations: 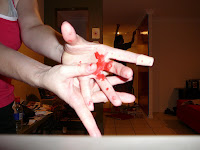 If only Duncan's blood had Dulux's patented water-based rinse-off technology, maybe Lady Macbeth might not have thrown herself off that turret.

Anyway, you can see Greg still painting in the background. I believe his words were "Less archiving, more helping". I reckon he was just jealous of my comedy gold effort.

After a few hours of drying, Greg then used a spongier brush rather than the roller to apply the second coat. And we now have this! 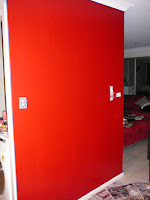 Looks damn bright, doesn't it? Well, keep in mind I had the camera flash on, as well as overhead and nearby lights. It's a strong red, but not as retina-challenging as it may seem in the photograph. We may have to go back for a third coat just to improve the coverage, but nevertheless, it's looking hot! How hot? Brothel hot!

Note: Big, big thanks to The Wah, for his manly painting skill and slightly camp obsession with "streaking! It's streaking!". ;)