A Day at the Budget 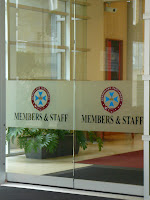 Everybody has a budget. Including Queensland. This Tuesday gone, I had the great - erm - pleasure of being assigned to cover the handing down of the Beattie government's 10th "financial blueprint".

It turned out to be a somewhat embarrassing day - if you read my previous post you'd know Deputy Premier and Treasurer Anna Bligh knocked over my microphone, and I was stuck at a table behind journos and cameras unable to retrieve and right it. Luckily I had brought my camera along, so I am now able to present to you the whole story - in pictures! 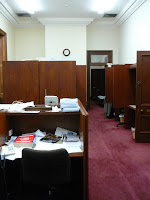 This is the media room, which is just off the gallery level of the parliamentary chamber. It's quite old. You can picture hard-nosed, chain-smoking political journos crashing away at typewriters, only opening their mouths long enough to shove in another Marlboro. Sometimes you can even smell the old cigarette smoke. 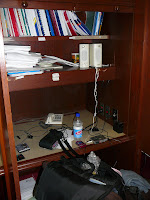 This is my official work station. It's in a small cubby-like area, just beyond the gallery door. I share this cubby with the AAP journo, and we take it in turns to get angry at our respective computers (mine's a laptop, you can see my giant satchel bag in the foreground).

It may not look that organised, but believe me, there's a very complex system in operation here. No, really. 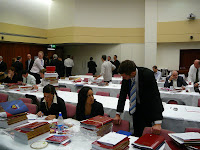 Inside the hothouse that is budget lock-up. Lock-up gives the impression there'll be alcohol, doesn't it? Sadly, coffee and crustless sandwiches were our only sustenance. I think the three smartly-dressed folks in the foreground are QUT students. I know that because they're always dressed better than me. 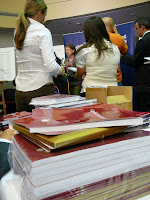 Her Bligh-ness! After two hours of reading and thoughtful consideration of the government's economic data ("what does 'expenditure'? mean again?"), Peter Beattie and Anna Bligh grace us with a lock-up media conference. I am currently sitting behind the giant stack of budget documents. It is while I am farting about taking these photos that Ms Bligh knocks my mic over. Premier Pete is being concealed by journalists in this shot. 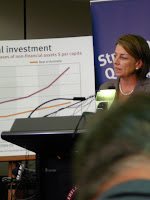 Here you can see two interesting things. The first is my mic, resting horizontally on the little side-table, where Premier Pete put it because I couldn't get out from behind my table to fix it.

The second is the large brown blur in the bottom left-hand corner. That is in fact the head of Channel Nine political reporter Spencer Jolly. Spencer was sitting next to me during lock-up. When I said excitedly "Hello, Spencer, this is my first budget!", he replied, "God bless you", and proceeded to give me some good advice about finding useful information amongst the giant stack. Thanks, Spencer!

After this I headed back to my cubby to begin the long afternoon slog of churning out budget stories. Hence the lack of photographic action from this time on. The budget itself was handed down in parliament at 2:30pm, so thanks to the lock-up - and Spencer Jolly's advice - I was able to get enough of a handle on things before official reporting could begin from 3pm (all information in the budget is embargoed until it's tabled in the house).

Radio is challenging when it comes to budgets, as you obviously can't include everything, and you have to think about keeping the listeners' interested in what could potentially be "boring political stuff". Still, I felt fairly confident with my budget work - and the best reward was coming home to find Greg had cooked me an lovely spaghetti bolognese. He's actually been cooking for me all week while I've been at parliament, which has been just amazing. All I do is sit on my butt all day listening to politicians rabbit on, but I couldn't be more exhausted had I just scaled Mt Everest on ice-skates while giving Kim Beazley a piggyback. Now that's tired.
Posted by Girl Clumsy at 8:22 PM