A Final taste of the Fringe

I have returned to home shores; but would like to throw up a few photos from Edinburgh before I launch back into my usual bollocks: 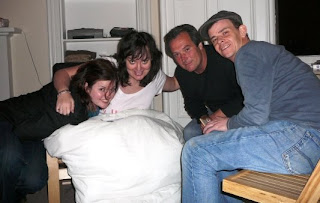 My truly awesome flatmates: impro guru and comedian Deborah Frances White, actor Phillip York and magician and "conman" Phillip Escoffey. These guys absolutely made my festival. Phillip York made me eat a bowl of spaghetti bolognese my first night after I came home tired and hungry after midnight, and told me tales of the theatre and TV; Phillip Escoffey cracked gags and taught me two magic tricks (which I'm practising); and Deborah - well, Deborah is always such an inspiration to be around. After a week spent with her, watching and discussing her show, talking about performance and comedy - I just want to write my own one-woman show and get up onstage. 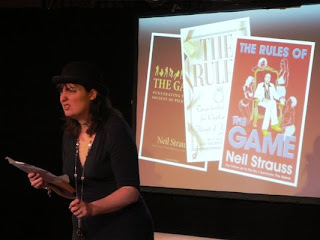 This is Deb in full flight during How to Get Almost Anyone to Want to Sleep With You - The Advanced Class. I took loads of pictures during one show but this is my favourite; I think it demonstrates her revulsion at the romance tips offered in the books pictured onscreen perfectly. 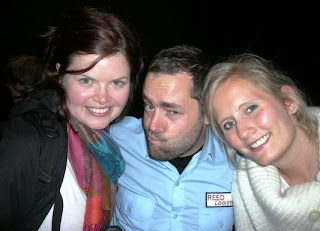 I was fortunate to play in two Impro Jam shows and one Improvaganza show at the Fringe. These two - Simon and Rachel - were in all three shows with me. They were both absolutely lovely, and I'm just sad that the format of the shows meant I didn't get a huge amount of stage time with them. The Impro Jam shows revolved around getting audience members up onstage and making them the star of scenes; while the Improvaganza was an elimination format.

To be honest, I was somewhat disappointed with the Improvaganza, which I'd really been looking forward to. The Impro Jams were fun, and I got to play some good characters, but I really wanted more interaction with other improvisers; to see how they played scenes, and hopefully to learn. Unfortunately I got chucked out after two rounds of the Improvaganza. I was a little bitter about it because in my first scene (a 'Subtitles') I'd played a Mexican woman (managed to get some nicely-stereotyped gibberish jokes in about burritos and tacos), and in the second (a 'Holiday Photos') I was basically just miming (although I got in a good nipple tassle gag - you see, my breasts always feature somewhere!). So I'd been eliminated without getting a chance to speak English or display any of my witty banter.

I tried not to be too bitter, as that's the way it goes with an elimination format - whether you're all the way from Australia or not. But after I took my seat in the audience and watched the rest of the show, I began to feel somewhat grateful for going early. Improvaganza was a midnight show, so I'd expected some swearing and raunchiness (Indeed, when I'd introduced myself, I described the appalling weather as "summer f***ing bollocks"). Swearing and naughtiness can be fun in impro - but only when used sparingly. I found some of the scenes descended into fairly harsh territory. During a 'Singing Bartender' scene, the guy playing the bartender told one man to solve his problem (which I can't remember) to "go to the Doc's and get your cock out" and responded to the woman's problem (that she was pregnant with his child) that she belonged "down the docks" and he might "rip her f***ing tits off".

It gets better (Or actually, worse).

The same guy was also involved in a first date scene, which began with him dragging his date into his living room, slapping her to wake up from the Rohypnol and asking "are we going to f*** now, or what?", and ended with him confessing that he'd "f***ed an elephant up the arse".

I was also somewhat intrigued by the role of the directors in this particular competition; they didn't horn or punish "bad" behaviour (fair enough I suppose because it was a late night show), and they let some scenes go on and on, when my natural instinct would be to end them. A 'Stunt Doubles' scene went for a good eight or nine minutes, only kept interesting by the great physical skills of the two guys playing the stunt doubles. No players ended scenes either - rather they just kept going even when again my instinct would have been to yell "...and time!"

To be fair, the final three - which included Misogynist Guy and Simon (the guy pictured above; he was a great player who did what was best for the scene) - did a 'Sing Off' which was really quite good. The final winner was the third guy, who was a member of the same troupe as Misogynist Guy, and won the right to plug their Fringe show. When he said their troupe name was "The Scat Pack" I thought if I'd had found that out BEFORE the show, I would have been more prepared for what was to come!

Don't get me wrong ; I'm very grateful I was offered the opportunity to play. It was an intriguing experience; but it made me glad I'd been in the "Impro Jams", as I would have been more disappointed had it been my only go at improv during my time at the festival. And it made me realise "Hey - Impro Mafia can do this!" Now I'm uber-keen to get a few of us together and head over there. Perhaps we can get a grant; or raise some money through a sponsor. But it's so possible for us - performing well in the Edinburgh Fringe IS an attainable ideal!