Of moths and geckos

I decided today was time to clean out the pantry. 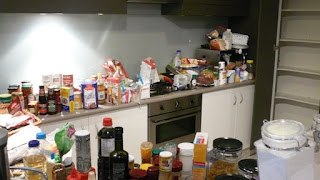 It's been a while. A embarrassingly long while. But finally I got sick of the moths. Pantry moths. Horrid things that scamper and bound amongst my wholemeal flour and felafel mix. Tiny winged bastards that've decided the best place to raise their wriggly cocooned babies is nestled deep in my pegged bags of polenta and yellow split peas.
A couple of weeks ago I bought a "pantry moth trap", which consists of a sticky sheet of cardboard that you twist into a triangle. A small round spot releases an odour irresistible to my flying nemeses, causing them to slam themselves antenna-first into a wall of glue. Death follows.

The pantry moth trap of doom was working well, claiming about 20 of the little blighters in the first few days. But then I opened up the cupboard last week to look at it, and there was a little gecko, stuck all fours on the glue, staring back at me with its black eyes.

Gordon Gecko had found out that greed, in fact, is not good.

Now I'm not too proud to admit I'm terrified of geckos. Oh yes, you're all mocking me, thinking "how could anyone not like cute little geckos with their sticky feet and see-through bodies?". But you won't be laughing when geckos stop being satisfied with cockroaches and start eating your household pets. Oh yes, my friend. Then they'll move onto you. They'll cling to the wall, their giant bloated bodies transparent against the Dulux, then leap out at you, cling to your face, and slowly naw away at your flesh. Eventually nothing will be left on Earth except an insatiable army of frenzied, corpulent death geckos.

Point is, it was one of those life situations where I found myself completely useless. The gecko was still alive; but despite my fear I had no idea how I could possibly put it out of its misery. Of course, touching it was out of the question. Fortunately the Wah is at one with creepy, slimy insect-eating house lizards, and immediately sprang to its rescue. Cue half an hour of a one man's physical struggle against glue - with me anxiously watching at a respectful distance and offering to grab the scissors or the blunt plastic knife to help ease Gordon Gecko from his agglutinative prison. Every time the Wah managed to pull a leg free, the stupid creature kept shoving it back on the glue. But eventually the Wah was triumphant, and the battered little thing was set down to rest in our flower box. He seemed to live on; we're still waiting for Gordon Gecko's corpse to turn up under the fridge.

So with the option of pantry moth traps now set aside due to the collateral damage of trapped geckos proving too emotionally distressing, I decided a full-scale assault on the pantry was necessary.

Today I stripped it bare, planting the contents on the kitchen benches and any other available space. I wiped the whole pantry down with Pine-O-Cleen treated wipes, then vacuumed into the corners, then scrubbed the whole thing out with a bleach water mix.

I went through all the dry goods and chucked out the infested products. If nothing else, the clean-out's been good for getting rid of a surprising amount of crap that's assembled in the pantry since we moved in. I cleaned storage containers and washed items still in plastic packaging. 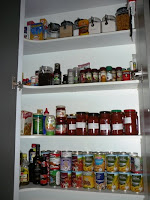 Later this evening, I began re-loading the pantry, going for balance and symmetry. I realised we really have far too many cans of chickpeas and cut baby corn, but I'm sure it'll all get used someday.

Problem is, as soon as it went dark, the moths started flitting back into the pantry.The suckers are like bad tenants; intent on making my life a misery.

So if anybody's got any good ideas on how to permanently rid an inner-city flat of moths, please comment liberally. If you have any gecko-busting tips, even better!
Posted by Girl Clumsy at 9:48 PM