It was a long week of bumping in, tech & dress rehearsals and a preview, but finally Friday and Opening Night arrived.

Thankfully, it was all good - the audience was large, excited and generous with their laughter and applause, and the cast threw everything at it, giving absolutely sterling performances.

Author John Birmingham and playwright Simon Bedak both came; they'd been enjoying a relatively "relaxed" afternoon of liquid refreshment, and so were in fine form. It was such a joy to hear their front row whoops and cheers from my position up high in the gallery. John has very kindly given us a write-up on his Cheeseburger Gothic blog - and it's terrific. I couldn't be happier.


Beeso, yours truly & Birmo. Thanks to Beeso for the photo!
Fellow Burgers including NatV and Patricia also came along, and it was lovely to see them. My Mum, bless her, personally dropped off some flowers before the show for good luck. She didn't stay (she's been ill and will come later on), but I was overwhelmed by such a sweet gesture. What lovely parents I have.

Two other guests I'd like to especially like to thank for coming - Treasurer Andrew Fraser and his wife Therese O'Reilly. Andrew is the Arts Theatre's local state MP, and very kindly took up my offer of opening night tickets. Turns out he used to live in Princess Street, just near the theatre, during his student days. I was chuffed that both he and Therese (who was so lovely) enjoyed the show. 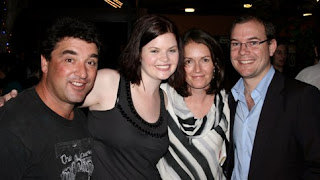 Simon Bedak, me (that's squinting at flash, not drunkeness), Therese & Andrew.
Saturday night was a typical second-night audience - a good crowd, but just that little bit more subdued in their response. But I finally got to take Simon onstage to show him some of our on-set in-jokes: Simon gets up close to our "Spring" Borg,
and shows off his Limited Edition Felafel stubby cooler.


I should point out we have fantastic Felafel merchandise for sale - it's all cheap too, ranging from $2 for a badge, to $20 for limited edition T-Shirts. All money raised goes back into the Brisbane Arts Theatre. So come along, enjoy a good gut laugh, and grab yourself a little bit of Felafel to take home!
Posted by Girl Clumsy at 8:57 PM