I have a love/hate relationship with Melbourne, I really do.

I mean, on paper, it's my kind of city. A sense of ye-olde-worlde-ness, full of neat architecture, an arts & cultural hub, and most of all - flat (Ah! Bless Melbourne's "slight inclines". I could wander around all day). But I just find something really off-putting about the city's airs about itself as the Centre of the Freaking Universe. Oh yes, Melbourne. You have Wicked. Aren't you great. You have the Australian Open and the Grand Prix and the Boxing Day Test and Rove Live. La di da. And I don't know whether its all Melbournites themselves creating this, or people who move there and declare everywhere else is more desolate than Gary Coleman's future in acting.

I confess I'm probably being a bit too Brisbane-based paraochial. But I've been to London, and Paris, and Rome, and  Madrid, and Vienna, and St Petersburg and several other classy European cities, and I've never felt the same sense of "If you're not here, you're not anywhere" that I get in Melbourne.

I landed at Tullamarine around half-eight after catching the 0500 Virgin Blue red-eye out of Brisbane. I caught the glamourous SkyBus into town, before wandering up Bourke Street to the mall, then around to Flinders Street Station. 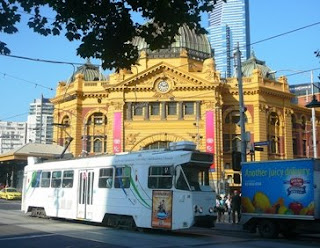 They have these, like, train/bus things that drive on the roads there.
They're called trams, apparently.
It was a very pleasant morning, with blue skies, a warm sun and a slight breeze. I hung out in Federation Square, where I wasted 55 cents sending a text message to the Optus "Text Wall" or whatever they call it. I sat and waited for over 45 minutes for my message to appear in scrolling electronic letters. But - nada. So sadly, I could not tell Melbourne that...


Nat directed "A Show You Wouldn't Take Your Wife To"
...which is a pity, really, because the Wives of Melbourne really should have been warned. You know, in case they were planning a trip north of Albury-Wondonga before May 2.

I was picked up by my ex-colleague and good buddy Gail, otherwise known as G-Watt, who shifted down to Melbs last November, and was kindly letting me crash on her fold-out couch overnight. We did lunch before checking out some op shops. Then G-Watt went for a nap (like me, she's all too familiar with those 4am starts), and I grabbed a tram down Lygon Street to the fancy "shops and restaurants" area. I strolled about until it was roughly 6pm, and time to meet Deborah Frances-White and see her Comedy Festival show.

The Trades Hall in Carlton is a lovely old building, with the names of Unions like the Saddlemakers & Leatherworkers still in black lettering on marbled glass over the doors, and flyers for political meetings and literary discussions taped up over every wall. The stone staircases are so worn from millions of footsteps, there are ten centimetre deep trenches near the curve of the bannisters (I know this, because being true to my name, I tripped over one). One staircase is dominated by a giant black-and-white photo portrait of Gough Whitlam, in profile and all statesman-like.

I had an interesting read in one of the ladies' toilet cubicles. One on wall was written the phrase "It's nearly midnight, and all I want with my life is to be your housewife". I was thinking to myself how the author of said phrase should have popped out to one of the Wymmyn's Collective Meetings, when I noticed that on the facing wall was written the charming phrase "F*** my c***". So the shallow might say that toilet booth contained the full gamut of the female emotional and sexual experience. But they might not want to say it to the Wymmyn's Collective.

Deborah arrived about half-six, and it was great to see her. She practiced a part of her show with me, and cross-checked some of the local references. We were sitting in the Bella Union bar, and it slowly started to fill up around us. Other comedians drifted in and said hello to Deborah - including Lawrence Leung, who now has a big show on the ABC. He and another comedian called Andrew McClelland are doing a show called Time Ninjas at the festival - another show I couldn't see because it was on at the same time as Deborah's. I said to them if they were proper time travellers, they'd arrange for me to travel back after Deb's show so I could see theirs. They ummed and ahhed a bit. Ha! I wound up telling Lawrence Leung that in a way, he'd already time travelled, because while I waited for Deborah, I'd been listening to a three-year-old Get This podcast in which he had been the guest announcer. He seemed a little impressed, possibly a little freaked out, I'm not sure.

G-Watt and her lovely partner Jason arrived around 8pm, and not long after we filed in to the Meeting Room to see Deb's show, How Almost Anyone can Become an Overnight Celebrity. It was fantastic - Deborah is just a top-class storyteller, and the way she goes about achieving the challenge of instant celebrity-hood is just hysterical. I highly recommend it to anyone in Melbourne, or planning to visit during the festival.

We celebrated with a few drinks afterwards, and I also got to say hello to a few other Edinburgh buddies - Deb's producer Jeremy, marketing guru Sonal, and conman and witch Philip Escoffey. His show, Six Impossible Things Before Dinner, was also on at the same time as Deborah's, so I missed it. But having seen it in Edinburgh last year, I can highly recommend it. He does fantastic "magic" tricks - if you like Derren Brown, you'll get a real kick out of Philip. You'll leave thinking "How the hell did he DO that....?" 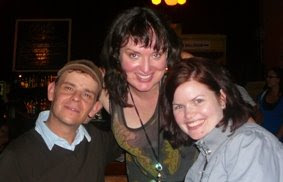 Philip, Deborah & I in the Bella Union bar. I had a Coke. But then, don't I always?
G-Watt, Jason & I got a tram home about midnight, and I slept like a baby on their fold-out. This morning I grabbed a tram into the city with Jason (G-Watt having gone to work while I was unconscious), then grabbed the Skybus back out to the airport. Melbourne had been sunny and warm, but when I arrived home around 11:20am, it was pouring rain. It seemed a bizarre reversal somehow, but very pleasant nonetheless.

And do you know - I managed to escape any April 1st tomfoolery entirely!
Posted by Girl Clumsy at 6:49 PM