The best-laid schemes o'mice an 'men,
Gang aft agley,
An'lea'e us nought but grief an' pain
For promis'd joy!
-Robbie Burns, To A Mouse (1785)

I offer up the words of the Scottish poet as a tribute to The Clan Squeaky. Of course Burns himself would probably prefer I offered you a celebratory dram instead (with a triple for himself, the great Hebridean lush), but nonetheless, the mournful Scots language will have to suffice for a eulogy.

That's right. The Clan Squeaky was a valiant enemy. But it has been all but vanquished.

The false sense of security we fell into after the capture of the fearsome matriarch Ms Squeaky in the pre-dawn hours of Thursday was broken less than 24 hours later, when her offspring decided to show their tiny baby mousey faces again. God knows where they had been in the interim since fleeing their toilet paper nest; somehow I think I may be better not knowing.

The Wah found the first one hiding under the fridge, after hearing suspicious rustling sounds. I then spotted the second dashing under the TV cabinet; and the third then turned up in the Bat Cave. Unlike their now-missing mother, they were not afraid of us. The Wah came close to picking up the third mouse by the tail before it zipped away. Being younger, they also seemed slower, which we believe aided in our eventual success in their capture.

I wish I'd had a video camera rolling on the series of slapstick physical encounters we had with the mice around half past one this morning. I've never seen so much silliness with shoeboxes. I managed the first capture; launching the large box lid from my recent boot purchase at Mousey One as it hurried away from the couch. Like a frisbee it soared and landed neatly over the little blighter. Unfortunately it was too big to flip over onto the box effectively, and Mousey One escaped The Wah's grasp and joined its sibling under the fridge.


We established another blockade of laundry powder boxes and the Wii Fit case and readied ourselves. The Wah got his "pointy stick" (a fancy fake-flower accoutrement thingy) and poked about under the Westinghouse. Then, bang! Mousey One, panicked, fled in the only direction he could, which happily was directly into the humane mouse trap, which we'd re-set near the fridge.

We turned our attention to Mousey Two, who unfortunately was a lot more spirited than his or her sibling. The Wah managed to slam a shoebox down on him, but it sprang out of a gap as he tried to put on the lid, and dashed into a gap between the cupboard and the dishwasher. A few more pokes later, and The Wah had coaxed him back out - eventually slamming both hands down around Mousey Two for a catch that would make *insert name of famous football goalkeeper here* proud. We got him into shoebox - and thus, we had two meeces: 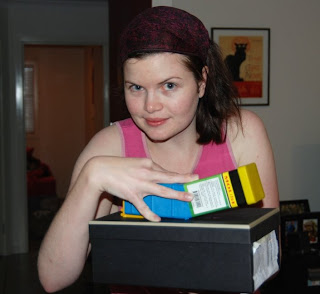 We headed up to the park again, and The Wah released the two mice: 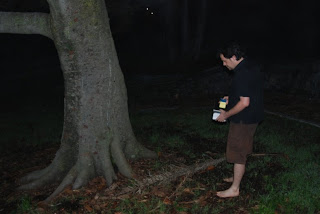 And just because it's pretty, here's a photo of a very misty Gregory Terrace: 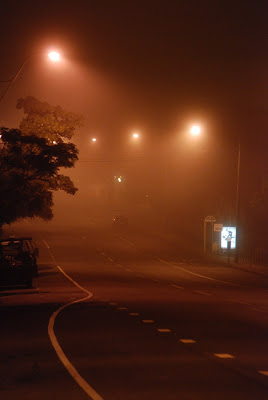 So I'm sorry Ms Squeaky. You laid plans to have a family in my house - plans that I have foiled. Well, technically The Wah was the grand plan-foiler, but that's beside the point. Life isn't fair, and I'm sure I'll have more than my fair share of plans "gang agley" too. But for now, I'm notching up a victory for me. Well, technically a victory for The Wah, but that's beside the point.

Of course, one member of the Clan Squeaky remains. I caution the tim'rous wee beastie to surrender now...
Posted by Girl Clumsy at 11:29 PM