Reason I should go blonde (and get around in 1920s gear): 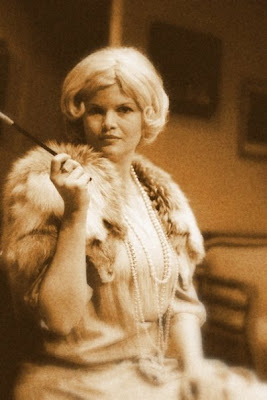 It is quite early on the Queen's Birthday Monday, but our very wonderful and talented musician Kris Anderson posted this photograph - from Sunday night's Impro Mafia performance of Agatha Holmes, our Agatha Christie/Sherlock Holmes improvised murder mystery parody - and my vanity took over. I adore this photograph; moreover, I adored the show.

I played Lady Augusta Wellesley, the owner of Cadsworth Manor, where the brutal murder took place. We held an audience ballot before the show to decide which of our characters would be the murderer and the victim, and what would be the murder weapon (in this case - a bowl of trifle). The first half depicted the events leading up to the murder (as "narrated" to the great detective Agatha Holmes by his assistant Wastings); the second half was Agatha Holmes' arrival, interrogation of suspects and the classic "denouement". 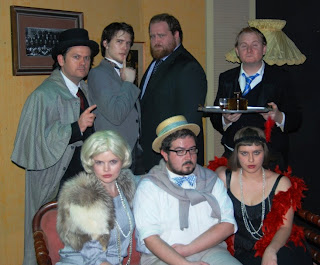 It was such a fun show; made all the more enjoyably by wonderful costumes provided by the Arts Theatre's spectularly well-equipped and pleasantly-staffed costume department. It was some damn fine impro too - a credit to Dave, who directed the show, and to my fellow performers, who just shone. The best thing about impro is getting to hang out and be creative with some of my closest and coolest friends - having audiences enjoy and even relish what we do is the absolute icing on the cake.
Posted by Girl Clumsy at 4:12 AM