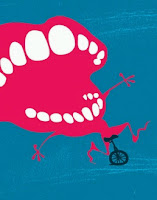 I've been attending a number of shows at the Brisbane Comedy Festival, taking place at the Brisbane Powerhouse until 27 March.
I've been writing reviews for Brisbane Times, and I've actually been trying really hard to make them interesting. My standard has been that if I have to resort to the phrase 'it's hilarious!', I've failed as a writer. I've tried to avoid cliches like "razor-sharp wit" and "side-splitting"; and I'm very aware of not giving too much away. I can't stand reviewers who regurgitate a comic's jokes without any thought to how that might spoil a routine. The key element to successful comedy is surprise, and I've really tried to bear that in mind.

So given all these self-imposed parameters - it's been quite a challenging experiment. You can decide for yourself:

There's also a write-up of the utterly awesome Weird Al Yankovic, who played just one show in Brisbane, as well as reviews of Mark Watson and Melinda Buttle, whose shows at the Comedy Festival have now finished.


Seeing Mel Buttle was somewhat odd. I can remember watching her act in Summer of the Aliens back at the Brisbane Arts Theatre about eight or nine years ago. I'd heard that she'd been getting bigger and bigger on the stand-up scene, but I'd never seen her live before now.

After the show, I was telling the friend who'd accompanied me that Mel wouldn't remember me, when she walked past, waved and said "Hi, Natalie."

Turns out Mel and I did a play together - Macbeth, at the BAT, back in 2002. She'd remembered; I'd completely forgotten. I like to think it's because she played one of the witches, and as Lady Macduff and the Doctor, we were never backstage at the same time. But needless to say, meeting her again - I felt like a right idiot.

It explains things though. I somehow feel like Mel Buttle and I should have been best friends. The way she talks about her crazy Dad with such affection, her nerdy white-girl rapping, even the unruly hair - there are many similarities.

Perhaps in an alternate universe we came out of Macbeth as tight buddies, and took baby steps in the comedy scene at the same time. Still, I think she's done better in this reality, given the stark differences in our respective comedy careers.

Oh yes, I did Raw Comedy - the open-mic competition that I've wanted to do since I was 20. After finally attempting stand-up late last year, I figured I had no more excuses. All I wanted to do was just get up there, and not f*** up too badly.

I think I did that at my first heat. I didn't expect to "win" (they pick two people from each heat to go through to a semi-final), and I didn't. But I was pleased with myself. Do you know how rare that is for me? To do something, and not beat myself up about all the mistakes I made? I'm a shocker, I really am. I forget that some people - my Mum, for example - would rather have their legs amputated and shot out of a cannon than get up onstage and attempt to make people laugh.

I was even a bit chuffed when the organisers called me back for a second heat. Unfortunately, I did worse the second time around. Initially I was frustrated, as it seemed to take the gloss of the relative success of the first heat. However, I'm trying to be philosophical about it. You have to have off-nights in stand-up comedy - who am I to play King Canute?

At least I've got the market cornered on nerdy history jokes. If only people knew more about history. I've got jokes about "Softsword" and "Magna Carta" coming out in The Wash.
Posted by Girl Clumsy at 6:40 PM