Capril is a sensational initiative. 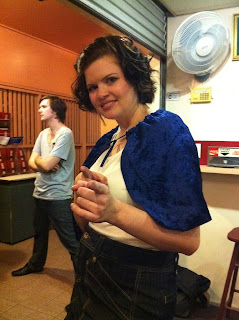 This is me in a cape, after Not So Pleasance, my directed ImproMafia long-form at the Brisbane Arts Theatre last night. A massive thank you to the cast for going with me on quite an ambitious idea, and the audience for supporting it. We had a barrel of fun and learned many lessons - but you know what? Impro isn't worth anything unless you're taking risks and challenging yourself, so HOO-AH! for us, I say.

I'd like to write more about Capril and some personal reflections - particularly in the light of doing a show like Not So Pleasance, which was all about madness and wonder - but we'll see how we go. After all, you come to Girl Clumsy for poor attempts at comedy and a glowing sense of schadenfreude, and I'd hate to ruin the atmos.
Posted by Girl Clumsy at 2:21 AM