My inbox pinged late one Wednesday afternoon earlier this month.

"Got these prices through and they have dates available. We have two to choose from."

Below that was a quote for a mobile baby animal farm. 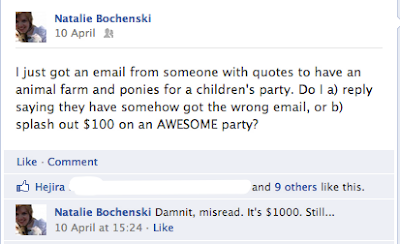 The reaction was explosive. "Do it!" came the near-unanimous response. I even had people offering to throw in money to defray the cost. And it dawned on me that there must be a lot of adults out there who rarely come in contact with farm animals. A few hours in the sunshine with some cuddly creatures seemed like a more popular idea for a party than a fry-up at the Playboy Mansion.

And so I started thinking, seriously, about hiring a baby animal farm.

Before that errant email, I didn't even know you could hire petting zoos, but in hindsight, of course, it makes perfect sense. What could be more fun for children at a party, save a jumping castle or beating the crap out of a clown?

Like most people, I adore most animals, particularly baby animals. There's nothing more deliciously cute than a wee lamb. And yes, that's a deliberate play on the fact that I eat the flesh of animals I find adorable.

My first action was to email the baby animal farm group, explaining how I'd wound up with their details. We began exchanging messages about the logistics of hiring a baby animal farm. It firmed as a very do-able project. For $695, I could hire a petting zoo containing: baby goats, lambs, a calf, a piglet, chickens, ducks, guinea pigs and a shetland pony.

I couldn't really justify paying almost $700 from my own funds (I have bills), so I thought about those offers of donations. If I made the event "Entry by Donation", and allowed people to throw whatever they liked, it could make an interesting experiment. How many people would come, and could we as a group make $700?

Then another thought occurred. What if I received more than $700 in donations? I couldn't very well keep the money, that would just be rude. A charity, then! There was an obvious choice. If I managed to make back the costs of hiring the farm, everything over could go to animal welfare.

Then I hit a moral boom gate. I couldn't very well make money for animal welfare if there was any possibility the animals of the farm were in any way mistreated themselves.

So I rang RSPCA Qld and ran the whole scenario by them. They completely got where I was coming from - wanting to put on an experience that people don't really have any more. But of course, animal welfare is their priority too, so they took the name of the company I'd made the tentative booking with, and did a search for complaints.

The company came back clear. Hooray! A step closer.

I also asked the RSPCA Qld if I could donate any proceeds to them. But that one's a bit trickier. The RSPCA has strict guidelines about what kind of fund-raising activities it will accept donations from. Even though mine is technically not fund-raising, they green lit the company, and they accepted that it's not my intention to provide pig-punching or lamb-wrestling opportunities to the general public - the event may still fall into the category of "using animals for entertainment".

So I'm still waiting on a final decision on that; but I accept the RSPCA has to manage its reputation. And I'd hate to open them up to attack simply because I wanted to bottle-feed a goat. Whatever happens, I'm sure there will be some animal welfare charity out there that will accept any extra funds.

I then rang the Brisbane City Council to find out about booking a local park in which to hold this ridiculous idea, given that my second storey apartment is not ideal. Turns out that's relatively easy to do - just fork out a $300 bond, fully refundable if there's no damage to the park.

So just over two weeks since that original email landed by mistake in my inbox, I can announce: 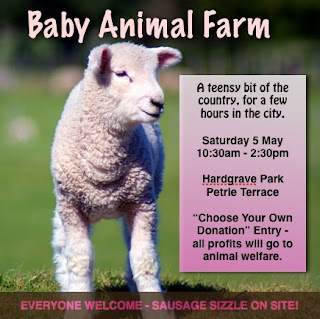 Hardgrave Park is opposite the Brisbane Arts Theatre, and they've kindly agreed to put on a sausage sizzle on the day.

So, if you're in Brisbane come along, for a few minutes, or a few hours. Throw some money in my hat. Play with some animals in a fun, happy way. Buy a sausage. Hell, bring a picnic and enjoy the autumn sunshine. See what sort of crazy schemes can come out of a missent email!