Internet, I Need You To Help Me Kidnap a Dog

The other night I pulled my car into the little laneway that our driveway faces onto, when I noticed something small and white hovering in front of the roller door.

As my headlights caught glinting eyes, I realised it was a little animal.

Shifting into neutral and pulling up the handbrake, I opened the door and walked around in front of the Yaris.

And there it was - a sweet little Maltese terrier, looking up at me with brown eyes.

I crouched down and opened my arms, and the little fellow ran up to me straightaway.

It didn't quite leap into my arms, but I knew straightaway there was a bond there.

And it's not just because I have something of a soft spot in my heart for small white dogs. 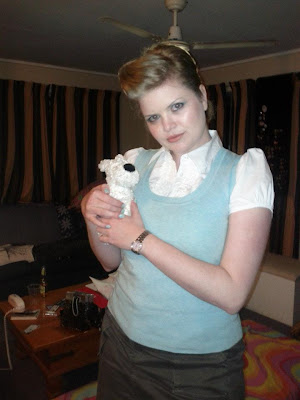 Sure, Tintin inspired me to become a journalist, and I've always liked the idea of getting a small white Snowy-type dog to be my shadow, my canine companion in travel, adventure, mystery-solving and crime-fighting. I know it's not practical. You can't just take a terrier on as hand luggage in these budget airline times of ours. And while I think a pooch would be an awesome addition to any office, I'm not sure whether my colleagues would be onboard.

But it's a fancy I've never quite lost.

So as I scratched this little Maltese terrier's neck, and realised it wasn't wearing a collar, a sudden future of possibility opened up.

I would take this little dog home, clean him/her up, shop its nervous half-shaking, and train it.

I would call him/her Snowy. We would do journalism, and fight...

"Are you right there?"

It was an older man in a townhouse on the other side of the laneway, a few metres from where I sat with the dog.

"Oh! Are you missing a white dog?"

The elderly man pointed. "The house on the corner," he said. Then he lifted up a small white pug-faced creature.

"I do have a white dog, but he has a black eye," he grinned, gesturing to the markings on the dog's grumpy face.

"Yes, it's from the house on the corner."

All right then, Mr Community Service.

I gathered up the sweet little terrier into my arms, and walked towards the townhouse on the corner. Its curtains were open, and through the screen doors I could seen a woman walk through the living room and towards the front door.

"Oh, thank you!" she said, unlocking the front door and walking up the short path to the gate. Two young girls followed behind, her daughters, she went on to say.

"She just got out; I heard you talking to the neighbour," she said, reaching to grab the white fluffball from my hands.

"Yeah, we took her for a swim in the sea but that doesn't seem to have worked. We'll take her in and give her the full treatment," she said, passing the dog back to one of her girls.

The woman smiled. "Thanks again," she said, as they retreated into the house.

I turned and walked back to my still-running car, my dreams of doggy derrings-do turning into mere doggy-doo.

Now, it may be the case that you think an all-white Maltese terrier being named "Snow" is not that surprising, but I say screw you, this is fate.

That is my dog, people. My Snowy, just across the road.

A lovely little dog with fleas. Fleas! I could take better care of that dog, even though my house is a bit messy. We could have adventures onstage and off.

But how to make it happen? How to deprive a probably-nice-but-let's-assume-they're-horrid family of their probably-treasured-but-let's-say-neglected pooch?

Internet - I need your help to kidnap a dog.
Posted by Girl Clumsy at 12:08 AM

Email ThisBlogThis!Share to TwitterShare to FacebookShare to Pinterest
Clumsy Categories: help, hints and tips, talk to the animals