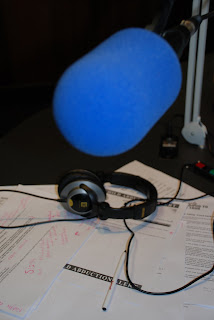 Today was day one of my weekend of co-hosting on 4BC.

I was as chuffed to bits to be asked to fill-in - and I had fun. I hope listeners enjoyed it!

The most memorable moment was asking the following quiz question:

My co-host John Miller's face went red and he had to go off mike to avoid spluttering on-air. I thought I'd said the wrong thing - and to tell the truth it was fairly offensive, even though I meant it as a joke. Luckily John said later that he thought it was funny, but just hadn't been expecting it.

Email ThisBlogThis!Share to TwitterShare to FacebookShare to Pinterest
Clumsy Categories: radio
Stumbling about in: Briz Vegas