Today I purchased The Wah a new belt. His old one really had outlived its ability to perform its basic task of holding up pants: 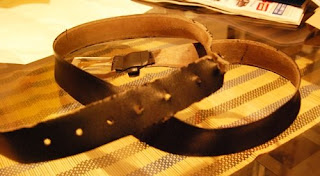 It's not so obvious in the photo, but the belt is actually only half a belt, having lost its backing some months back. It's as flimsy as Lindsay Lohan's lesbianism. The rip you can see near the tightest hole is not only a fairly unfortunately phrased piece of innuendo - it's also more than half the belt's width. The damn thing is virtually useless, and it looks terrible. It's like Lindsay Lohan after seven lines at the Viper Room.

But The Wah tends to be like this. He will own things to the point of physical destruction. When we first started dating, he always carried with him a black canvas knapsack. He carried that damn thing around for at least four years, despite the buckles buckling and holes growing ever holier. He'd owned it for at least three years before we'd met - eventually it got "lost" somewhere. I may have had something to do with that; I can't honestly remember (Your Honour). Eventually we had to buy new backpacks for an overseas trip, and he began using the attachable daypack instead. It turned out to be more useful in the "holding things I own" department.

I'm always slightly wary of just throwing The Wah's things away. He gets very sensitive and starts mumbling things like "Bloody woman, getting rid of my stuff, leaving me with nothing, tearing it all away, take my life why don't you". So I do tend to make grave and sad-eyed requests before I chuck the damn things in the bin.

And I must admit to having my own "keep until reduced to atoms" items over the years - there was that bright red Max Factor lipstick that my mother gave me to use during ballet concerts when I was about eight, and that I only threw away after high school; there are all those branded pens I buy from various castles, museums or other tourist attractions that I stash in a bag in my study despite the fact half of them don't work; and then of course there's my blue Crocs, which really are over-worn, but remain in my wardrobe because goddamnit I walked the Great Wall of China in those suckers and I may need to enter them as evidence to prove as much one day.

So what about you? Are there clothes, toys, bits of electronics, pieces of furniture, bathroom flotsam or general jetsam that you just can't bring yourself to throw away?
Posted by Girl Clumsy at 10:45 PM

Email ThisBlogThis!Share to TwitterShare to FacebookShare to Pinterest
Clumsy Categories: home and contents, questions
Stumbling about in: Briz Vegas