This is my diary for 2011 - and my aim for the year is to live by the titular slogan. 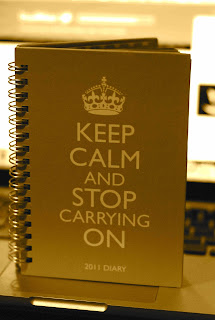 I've been thinking about 2010, and trying to give it a mark of sorts. And I realise that sort of thing is impossible because there are always ups and downs and other trite cliches.


I've done a bunch of awesome work for the Brisbane Arts Theatre, including directing the revival of He Died With a Felafel in His Hand, and the premiere of The Tasmanian Babes Fiasco. Both these shows did great guns and I love them, their casts and crews with the fire of one thousand suns. But they've also allowed me to become proud of myself. Tassie Babes in particularly presented a number of challenges, and in hindsight I'm amazed at the number of mistakes/poor decisions I made. Some of those decisions are still having repercussions. But you know what? I am finally in a position where I can wholly appreciate the efforts of everyone involved in that show, and yet be confident enough to realise that without me throwing everything I had at it - mistakes and all - it wouldn't have got up.

ImproMafia remains my pride and joy and I'm pleased my first year as Artistic Director saw the company continue to grow and put on amazing work. Where do you start - Prognosis: Death! Pandemic, Agatha Holmes and Fists of Fury were just some of our creative and commercial successes. I was also very pleased to direct the first impro show in Brisbane to put a proper dog onstage.

The company was able to begin paying players at our Albion Comedy Club gig; and I'm particularly proud of the performance opportunities we created for new players at our Speakeasy free show - even after our venue shut down quickly in July under cloud of suspicion. I was able to travel to Sydney in May and Canberra in July to perform and mingle with fellow players - which also helped as I try to better appreciate my own impro abilities. I often feel so unworthy or untalented next to my fellow players, but am slowly, slowly realising that is a limitation I place on myself. The reality is I have ten years of experience, a bunch of good theatre skills and ideas - and I commit to things and see them through. If other people don't see that perhaps it's simply because I'm not showing it.

In April, I had a dramatic car accident which ripped my Corolla, the Hummer, untimely from this world. Two weeks and an insurance payout later, I took possession of a Yaris, which still doesn't have a proper name. Well, unless you count the Shakesperean "Stabbed-In-The".

I would have liked to have travelled more; although a week in Hong Kong in September to see the awesome local production there of He Died With A Felafel in His Hand was a great break. Still, I would say I didn't actually properly relax in 2010; perhaps not at all. I would have liked to take some holidays over the New Year, but insane goings-on at my place of work have put the kybosh on that.

Speaking of work, it remains a tangled web for me. I enjoyed the six months or so during the middle of the year where I was able to focus mainly on the state political round. I do so enjoy covering parliament, sitting in creaky chairs in overly cold air-conditioning listening to Queensland's elected representatives snap and bark at each other across the chamber. However, many colleagues were forced to take extensive leave this year (except me, I'd already used mine up), and then in November we were hit with three staff resignations. This type of thing always throws me back into the jack-of-all-trades position, which can be frustrating.

But on a self-congratulatory note - I have been working my backside off to cover the Queensland floods in the best possible manner, despite having an absolute skeleton staff. It would be too time-consuming to outline everything that's being done, and I certainly don't want to take away from the actual misery being suffered by so many flood-affected people. But the experience has made me think that I might be a half-decent journalist after all.

Oh yeah, and this year I turned 30. I had an awesome James Bond-themed party with many friends.

I really want to go back and do some of the 30 Things again - like pole-dancing, and gliding, and Morris dancing. And dammit, I still want to do stand-up comedy, despite briefly becoming a minor hate figure amongst the circuit after a admittedly savage review.  However I remain crippled by an inability to write a cohesive, proper joke. But I've got a gig locked in for January and another for February, and I've also been urged to consider doing the Raw Comedy Competition. But GUYS, that will mean writing MATERIAL. I don't know how to DO that.

I began working out with a personal trainer near the end of the year; and I really want to continue that in 2011. I know weight loss goals are foolish New Year's Resolutions, but I am interested in being healthier.

To cap the year, in early December I was named a Blogger "Blog of Note", which has brought hundreds of no doubt attractive and intelligent readers here to the website. I do so hope you return in 2011. Of course, regular readers, you continue to rock.

This post has been mostly ALL ABOUT ME. It would be another 47, 000 words long if I threw in mentions of all the people who made up my year. Some make it bittersweet - discovering that an old "school friend" who hasn't spoken to me in over four years got married; and that another had de-friended me from Facebook (oh noes!) really made it hit home how times have changed. Some people don't want to know me any more - and that's really okay. Because there are so many others who are awesome.

I have a fantastic family, good friends, and a pretty cool Wah (Every girl should have one. Every boy too). I am lucky. 2010 has been mixed, but it certainly can be topped in 2011. I have no resolutions beyond being kind to myself and others, and being strong when occasion demands.

On day One of month One of Year One-One, I wish you all the best too.

Oh wait. I forgot to mention - I MET TONY MARTIN. Best. Fangirl. Ever.

Oh wait again. I got a new computer, an Apple MacBook Pro - and a smartphone, a HTC Mozart Windows7. If nothing else, 2010 knew how to be ironic.
Posted by Girl Clumsy at 7:25 PM